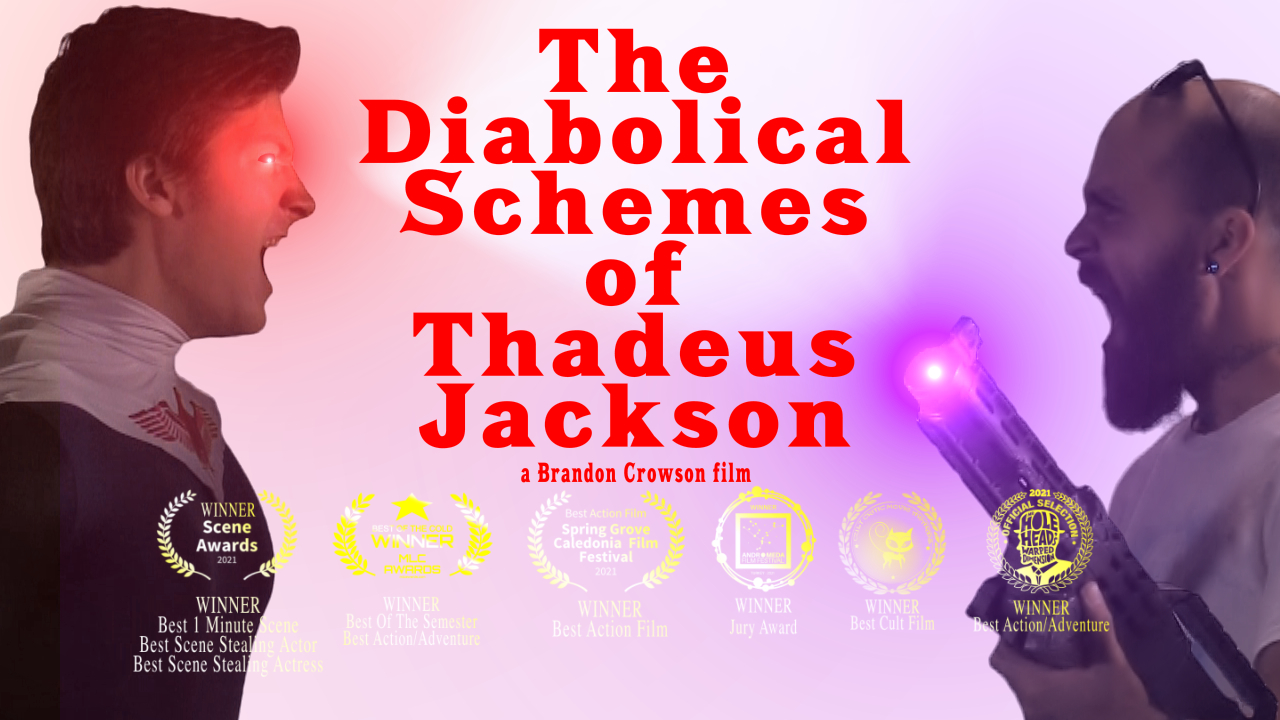 
September 16, 2021: A new indie superhero movie is making big waves in the esteemed film festivals across the world. Titled “The Diabolical Schemes of Thadeus Jackson”, the movie has earned rave reviews from critics and has also won as many as 9 awards in 3 countries, including 3 best action/adventure film awards in various film festivals. The film will be released shortly on Prime Video in the coming month.

“The Diabolical Schemes of Thadeus Jackson” is scheduled to have its Premiere on September 2, 2021, at the Parkway Theater, Minneapolis. Following the Premiere, the film will be officially released on Prime Video worldwide and DVD September 3, 2021. Tickets to the premiere are on sale now!

The award-winning indie superhero film is directed by Minneapolis-based award-winning filmmaker Brandon Crowson, with Sean Simmons, Nathan Cade, and Madeline Fleming in major roles. Shot in the summer of 2018, the film was produced and organized as a profit sharing arrangement between Son Of A Crow Productions in Minneapolis, Green Screen Studios in St. Paul, and dozens of artists in the Twin Cities area- under the able leadership of writer-director-producer Brandon Crowson.

“The Diabolical Schemes of Thadeus Jackson'' revolves around the story of Thadeus Jackson, played by Sean Simmons. Jackson plays the role of a former NSA Agent who is out on a mission to kill The Supremacist, Defender of Capitalism and The American Way, and is ready to risk it all to make the world a better place. Indie actor Nathan Cade portrays the role of The Supremacist here while Madeline Fleming dons the character of Madeline the Telekinetic.

Speaking of the film, Crowson revealed that the movie was inspired by the ethos of strong protest against the ongoing oppression and brutality directed at people of color. Interestingly, the film comes with a unique approach towards the treatment of its hero and villain that has broken the stereotypical outlook towards “heroes” and “villains” in a film. The protagonist of the movie isn’t a hero at all but a man seeking revenge against forces far more powerful than he is. On the other hand, the villain in the film is being reported by the media as a “superhero”, whose crimes have been inspired by specific instances of police brutality.

“I was tired of going to Black Lives Matter protests that don’t change anything- so I decided to channel my anger into my second film.”, stated Brandon when asked what inspired the film.

There’s a scene in the movie where The Supremacist chokes a black man to death while giving a long winded "pull yourself up by your bootstraps" speech. The character's last words are "I can't breathe." Per the statements of the award-winning director, that scene was supposed to be a nod to Eric Garner, whose last words were "I can't breathe”, when he was murdered by the NYPD in 2014. While Mr. Crowson was editing the climax of the film, George Floyd was killed by the Minneapolis Police 1.5 miles from Mr. Crowson’s home. His last words also being, “I can’t breathe.”

“I made this film as a dark humored social commentary about various serious issues that have only gotten worse in the time it took me to edit the film. That's the America I live in.”

“The Diabolical Schemes of Thadeus Jackson” had its theatrical world premiere on May 1, 2021, in Green Bay, Wisconsin, at the MLC Awards where it won the awards of Best Action/Adventure Film and Best of the Semester. Actor Joseph Gainer won Best Scene Stealing Actor while Actress Andi Hanson won Best Scene Stealing Actress at that same festival. The film has also won the award of Best Action Feature Film at Another Hole In The Head Presents: Warped Dimension, San Francisco’s longest running genre film festival. It has further been acknowledged with the award of “Best Action Film” at the Spring Grove Caledonia Film Festival as well.

Tickets to the Minneapolis premiere are available at https://theparkwaytheater.com/all-events/diabolical-schemes-thadeus-jackson

Company :- Son Of A Crow Productions