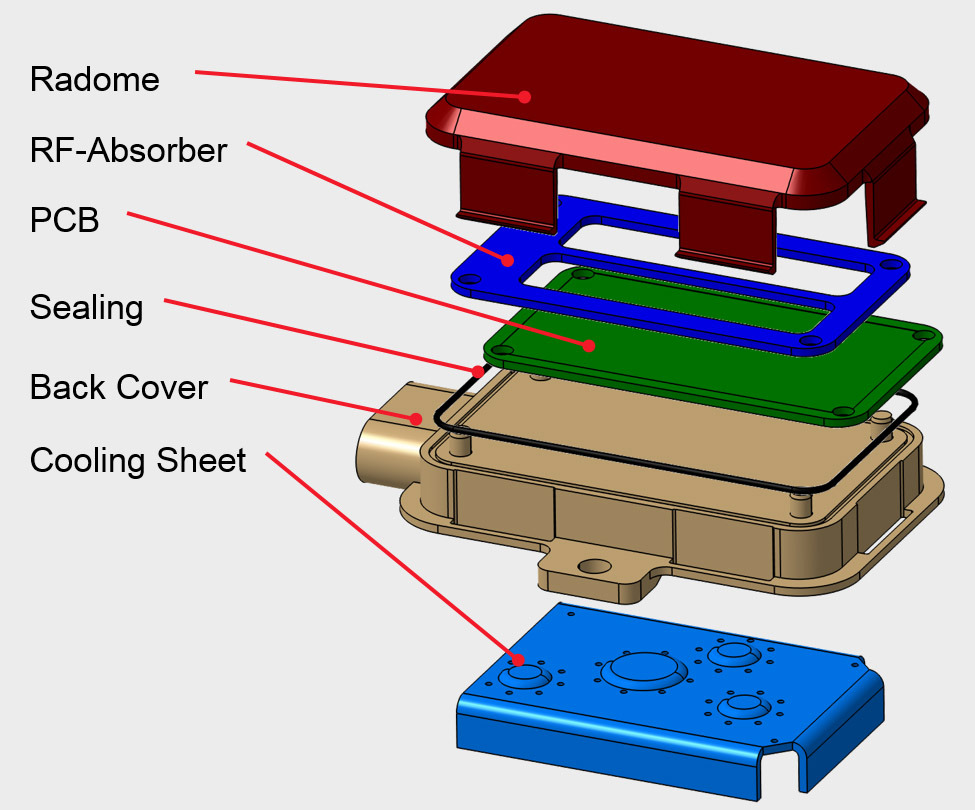 
Cologne, September 9, 2021 – LANXESS, one of the leading suppliers of thermoplastic high-performance polymers, regards itself as a development partner for New Mobility. The specialty chemicals group has developed a new concept for radar sensors with integrated thermal management that will benefit autonomous driving. Though there is still a long way to go, driver assistance systems are increasingly set to become a key feature of future generations of cars. 360-degree monitoring of the vehicle’s surroundings is enabled by – among other things – radar waves. The radar sensors are an essential component of, for example, distance control, lane change monitoring, collision avoidance and blind spot monitoring systems.

The sensors have to be dust- and water-proof and so are designed as fully enclosed systems. But this makes it difficult for heat to be effectively dissipated from the inside, which, in turn, can impair the performance of the electronics and durability of the sensors. “This is why we developed a concept that allows heat to be dissipated by means of thermally conductive plastics in combination with metallic cooling elements,” says Gregor Jaschkewitz, application developer in the High Performance Materials (HPM) business unit at LANXESS. “The individual sensor components are assembled using integrated snap fits and hot rivets, a process that is much less costly and time-consuming than using screws.”

For a radar sensor, this new concept from LANXESS involves the following individual components: a front cover (“radome”), radar absorber, PCB – including antennas – and back cover with an integrated cooling element. The radome faces away from the vehicle and has to be made from a plastic offering a high degree of transmission for the radar waves. Polybutylene terephthalate (PBT) is a well suited material here because it has a low dielectric constant (Dk) and loss factor (Df).

Functional integration thanks to hybrid technology

The back cover is the most complex part of the whole assembly. It is manufactured in a plastic-metal compound (hybrid) technique with polyamide 6 and a metallic cooling element. This enables engineers to leverage the huge design freedom offered by the injection molding process, allowing them to integrate features such as reinforcement and cooling ribs as well as slots for connectors and the strain-relieved attachment of cables. Most importantly of all, however, the surface of the metallic cooling element can be overmoulded with thin areas of plastic. “The heat generated on the electronic components of the PCB can be efficiently dissipated from the whole assembly through these plastic areas. This effect is supported by thermally conductive polyamide 6 from our Durethan BTC product range as injection molding material,” says Jaschkewitz. Polyamide 6 is also extremely tough and ductile. Another benefit of the hybrid design is that the metallic cooling element shields the electronics inside the radar sensor against electromagnetic radiation, which means that its function is not impaired by external radiation.

The assembly can be sealed with O-rings or sealing lips created in a two-component injection molding process.

With most concepts for plastic radar sensors, the radome and back cover have always traditionally been made from thermoplastics that can be welded to each other to create a fully enclosed assembly. This generally meant that the same plastics had to be used for joining the two components. “Our approach, however, places fewer restrictions on the choice of materials and makes it easier to use tailor-made compounds,” says Jaschkewitz.

Benefiting from the knowhow of a global development partner

LANXESS believes that sensors for driver assistance systems will offer a wealth of opportunities for its Durethan polyamides and Pocan polyesters. “We want to benefit from the huge growth potential in this application segment and advance technological innovation with our own ideas – like the concept for radar sensors,” says Dr. Christopher Hoefs, a global application development expert in HPM. For example, the business unit also recently unveiled a concept for the modular design of charging connections for electric vehicles.

HPM has pooled its extensive knowhow in material, application, process and technology development under the HiAnt brand in order to support partners and customers in projects. Hoefs stresses: “We are supporting our partners at all stages of application development – from concept design, material optimization and mechanical and rheological simulation through to component testing and the start of series production.”

LANXESS is a leading specialty chemicals company with sales of EUR 6.1 billion in 2020. The company currently has about 14,800 employees in 33 countries. The core business of LANXESS is the development, manufacturing and marketing of chemical intermediates, additives, specialty chemicals and plastics. LANXESS is listed in the leading sustainability indices Dow Jones Sustainability Index (DJSI World and Europe) and FTSE4Good.