Items from The Living Estate of Mr. Richard S. Ravenal will be Auctioned October 2nd by EstateOfMind 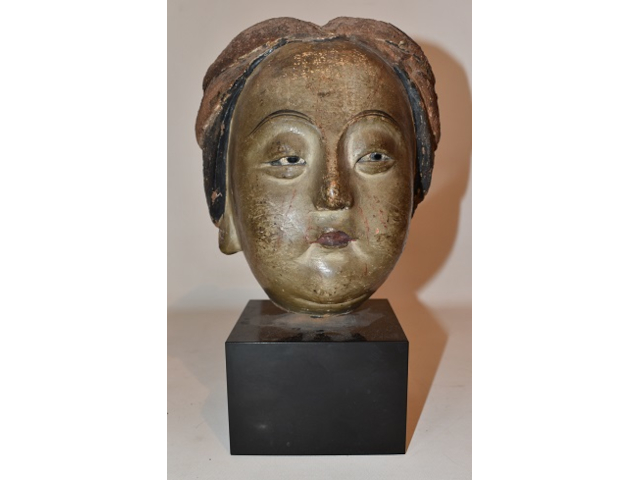 
Middletown, NY, USA, September 10, 2021 -- Items from the living estate of Mr. Richard S. Ravenal – the now long-retired purveyor of Asian art and antiques and former owner of Asian Gallery in New York City – will headline a two-session auction planned for Saturday, October 2nd, by EstateOfMind, online and live in the Middletown gallery at 195 Derby Road. A preview will be held at 7 am Eastern.

Session 1, beginning at 10 am, will feature more than 100 lots of guns, ammunition and other militaria. Session 2, starting an hour later, will be the main sale, with the Mr. Richard S. Ravenal collection and other fine items pulled from prominent local estates and collections. Internet bidding will be provided by LiveAuctioneers.com. Phone and absentee bids will also be taken.

Items from the Mr. Richard S. Ravenal collection will feature a rare, 13th or 14th century Chinese Ming Dynasty gessoed, straw-bound mud-head of Kuan-Yin, with appliqué painted lacquer over straw and mud and inlaid agate eyes. It comes from a temple in northwest China and shows the influence of the Silk Route Sung/Yuan Dynasty. It is also in a remarkable state of preservation.

Also from the Mr. Richard S. Ravenal collection is a 12th century Khmer Dynasty bronze of the Cambodian Buddhist deity Mahayana; a fine Chinese glazed pottery Buddhist priest from the Ming Dynasty, 16th century, with provenance; and a rare Shiva-Linga carved stone one-face column from the 2nd or 3rd century. Any one these would make a fine addition to any collection.

Sports collectors will be treated to a Jackie Robinson autographed photo with certificate of authenticity; a baseball signed by Mickey Mantle with certificate of authenticity; and many baseball cards, including Roy Campanella, Hank Aaron and other stars. Collectibles will include a Teenage Mutant Ninja Turtles #1 comic book (1984, graded 9.0), and a Flaming Carrot comic.

Live, in-gallery bidding is available, but seating will be limited and all CDC, state and local regulations with regard to the COVID virus will be strictly enforced. Bidders can view lot photos and get more information at www.EstateOfMind.biz and at AuctionZip.com (ID # 11093).

Ged Online
There is no better press release writing company as 123 term papers.