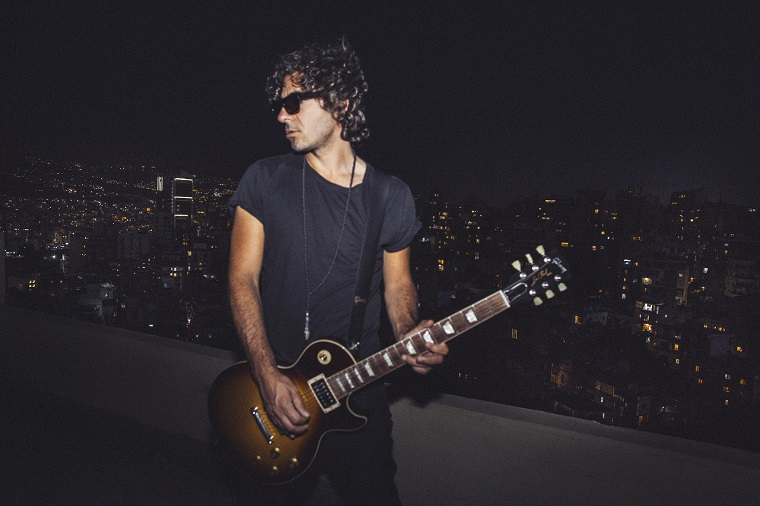 
The video is basically a combination of and tribute to a number of things I love: Classical and contemporary ballet, which is why it features dancer Mira Majzoub (from the Beirut Contemporary Ballet); a subtle goth aesthetic which we thought would be tragic-comical with the overwhelming presence candles, knowing that we shot it in Lebanon, a country going through the worst power cuts crisis in history; and as always, an unapologetic throwback to the guitar hero days, the epic soloing scenes of Les Paul warriors likes Slash or Joe Perry that I grew up watching. Those were the general themes we had in mind.
Concerning the plot, it basically tells the story of the irresistible power of music to pull us in and possess us, symbolised in the last scene when the dancer stops fighting and just surrenders, becoming one with the music herself.

After the discreet release of four singles in 2020 (Crazy Train, Without a Doubt, Young Love, and World Gone Mad), Rabih Salloum dons the moniker of Grave Jones to herald the release of his first album Heartrage Hotel (Jan 2022) with its explosive lead single Smithereens. A man of the world, Jones pulls inspiration from his time in academia as a philosopher and writer, in entertainment as a rock star and model, and in adventures that have taken him from his native Lebanon through Paris, Stockholm, Milan and beyond. Armed with this experience, Grave Jones is ready to bring real rock back to the pop charts by the catchiest melodies with raw, heavy production on his single Smithereens.

Like its namesake, Smithereens is loud and unapologetic. Heavy distorted guitars pave the way for Grave’s gravelled, textured voice that cries with the raw honesty of a singer reminiscing on anger pointed inward and out. Combining the loud guitar riffs that scored Jones’ youth with catchy melodies and contemporary inspired electronic production, Smithereens captures a sound that transcends any one setting or period.

Grave Jones and the Heartrage Hotel album mark Lebanese musician Rabih Salloum’s long awaited return to the scene following the rousing success of his previous musical project Slutterhouse that saw him share the stage with the likes of the Klaxons, Sleigh Bells, and Super Furry Animals and working with legendary producers Eric Chedeville (Daft Punk, Sebastien Tellier, Charlotte Gainsbourg) and Dimitri Tikovoi (Placebo, Nick Cave, Kill the Young). After the band’s success playing festivals across the world like Liverpool Sound City, Dubai Sound City, Stockhold Fashion week, and landing sync details across MTV 2 and EA Sports, the band split as Salloum left the music world ahead of his triumphant return almost a decade on.