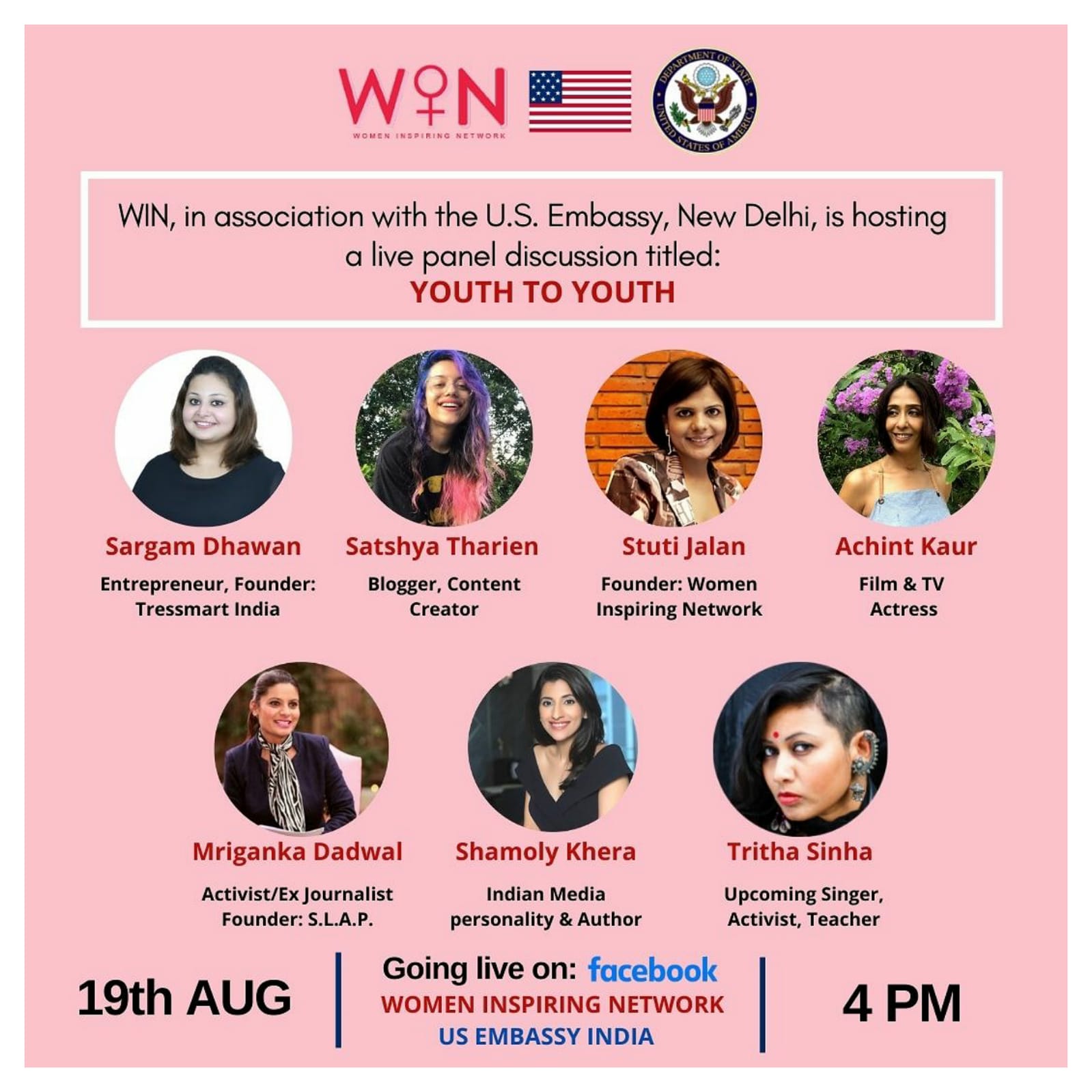 The discussion is essentially a ‘Youth to Youth’ conversation that aims to give some fresh new outlooks and stances with respect to Youth empowerment. The session will also shed light on matters, such as social media being a magnanimous medium that\'s letting people have a voice and take charge of their lives, what the future hold for the digital wave of empowerment among the youth today, etc. The youth of the nation can surely #BeTheChange once they begin to recognize the power of their voice. Each panelist will bring forth a unique perspective to the table.

Achint Kaur is a reputed Indian television, theater, and Cinema actress and is known for her versatile performances.

Tritha Sinha is an upcoming singer, teacher and activist, featured on BBC, Arte.She has been singing as a solo artist for a decade now. She made a name for herself as a Bollywood singer in her hometown of Kolkata, and is trained in Indian classical singing. She has collaborated with a wide range of Indian and Western musicians. She is also the founder of ‘Stop Patriarchy and Create Equality’ (SPACE).

Sargam Dhawan Bhayana is a successful entrepreneur, founder of Tressmart India and Director of Paul Penders Botanicals. At a young age of 26 years, she has already bagged a lot of laurels and awards throughout her entrepreneurial journey so far.

Satshya Tharien is an \'Edutainment Content Creator\' and a blogger who has used her social media presence to sensitize the society on issues that are its very backbone. She\'s now an independent content creator who grew her audience from 5000 to over 40,000+ people during the tumultuous year of 2020, with her light-hearted content.

Dr. Shamoly Khera is a renowned Indian media personality and author.She is a well-known personality in the Indian media and TV industry. She has many accolades to her name and has had an illustrious career as a TV Presenter, content producer, public speaker,celebrity coach and as an Author.

Stuti Jalan runs one of India\'s most niche and upcoming public relations as well as social media companies called Crosshairs Communications.She was just 23 years old then she founded the organization. The company has grown since its inception through strategic and effective planning fused with innovative ideas and leadership. She is also the founder of Women Inspiring Network, which is an NPO and an inspirational storytelling network to connect aspiring woman leaders from different walks of life.

Stuti Jalan states that \"Youth empowerment is absolutely imperative. I believe that if the youth possess the requisite strength and dynamism, they\'ll arise and act to generate a quantum transformation in the society. It would be intriguing to discuss this further with such renowned panelists on-board.\"

Margaret MacLeod, Cultural and Educational Affairs Deputy, U.S. Embassy, New Delhi Quotes:
‘The U.S. government sees youth not just as beneficiaries but as leaders and partners in finding solutions to our shared challenges. We value their engagement on economic development and social encouragement of their involvement. The generational impact of COVID-19 on economic development has made youth voices more important than ever.’

This insightful, in-depth session highlighting the need for and the essence of empowering the youth of the country will be broadcasted across social media platforms such as Facebook, YouTube and Instagram.

Women Inspiring Network (WIN) is an inspirational storytelling network that emerged out of the lockdown to connect aspiring women leaders from different walks of life. Now, with a community of 5000 remarkable women, WIN connects a vibrant network of female leaders who create a domino effect of sharing and empowering. We are a first-of-its-kind digital network which shines light on the awe-inspiring stories of female achievers. We also provide them with a content platform where, by connecting with each other over their journeys, they can continue to inform and inspire the young professionals.

From wellness to fashion, movies to journalism, entrepreneurs to activists, WIN has been able to weave these different narratives into an integrated fabric which illustrates the often-untold stories of female trailblazers and change-makers from all and every background. Being a digital platform allows WIN to democratize access to the knowledge of struggle, perseverance, and success through webinars, Instagram Live sessions, and online series. As a women-founded and women-only team, we at WIN recognize and shine light on stories that are relevant in contemporary gender equations. Ours is a comprehensive movement to Pay It Forward.


U.S. Embassy, New Delhi- The U.S. Embassy in New Delhi is one of the largest U.S. diplomatic missions in the world, a reflection of the importance the United States places on its relationship with India. The Embassy represents 17 U.S. federal government agencies, from the U.S. Department of State to the Federal Aviation Administration.

Buy 100% high-quality replica watches with a 2-year warranty and free ground shipping!
Get your Explainer Video at 100 dollars only Today.
To ensure stability and reachability of your applications at all times, remote DDoS protection can keep your hosting services online
Hire an expert to write a paper for you at writers per hour.