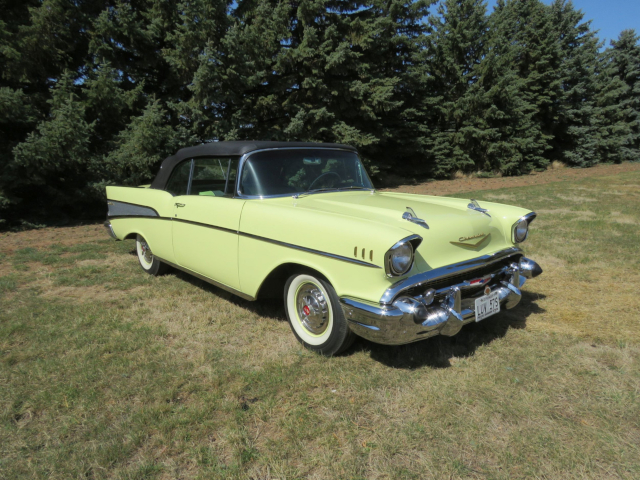 “The auction will be held live at the Krinke’s family ranch,” said Yvette VanDerBrink of VanDerBrink Auctions, which is conducting the sale. “There won’t be any cell phone reception, but there is high-speed Internet to the residence and online bidding is available. But it’s best to come in person and spend a beautiful weekend on the high plains of gorgeous western North Dakota. There’s more than enough to finish off that man cave or score a hot rod or collector car.”

Internet bidding is available via the VanDerBrink website: www.VanDerBrinkAuctions.com.

The Krinke collection is a wonderland of amazing cars, tractors, signs and more, mostly from the 1930s to the 1960s. The property, which has been in the family for over 100 years, contains a field of dry Western metal (no rust) barn find Fords, many dating from 1932 to the 1940s, ideal for those rod projects. The rare 1932 and 1933 Ford 3-window coupes are a hot rodder’s dream.

The collection features Dearborn and AACA award winning cars that would complete any collection. While the town of Scranton was growing and updating, Neil would get the old signs that were set aside. Some he even rescued from dumpsters. He lovingly gathered all he could, mostly from a radius no more than 50 miles from the ranch, and he sold practically nothing.

Neil Krinke has been fascinated with all things automotive since childhood, when, at eight years of age and barely able to see over the dashboard, he was entrusted by his father to gather loads from the field by driving a 1928 Chevrolet grain truck; then, up to high school graduation, when he bought his first car (a 1949 Pontiac); and on into adulthood, when he got the collecting bug.

One of the first cars Neil obtained was a 1929 Ford Model A that he bought so a man in town could bury his brother. He met his future bride in a similar Model A. Later, the couple joined the early Ford V8 club and saw how much the members loved their cars and their histories. When he bought a 1941 Ford and spent six years restoring it back to factory condition, he was hooked.

Mercuries will include an older restore, fully loaded yellow and white 1950 Mercury convertible with a flathead V8, the 1964 Mercury Marauder two-door hardtop car that Neil and his wife Rosalie bought new with 30,893 original miles, and 1948 and 1942 Mercury coupe project cars.

An open-house preview will be held the day before the auction, on Friday, September 17th, from 10-6 Mountain time, at the Krinke ranch located at 10105 132nd Avenue SW in Scranton, S.D. No early previews, please; the family is farming. Scranton is in western North Dakota, 180 miles each from Bismarck, N.D. and Rapid City, S.D., and not far from Glendive and Billings, Mont.

For more information about the sale of the Neil Krinke collection on September 18th, visit www.VanderBrinkAuctions.com.