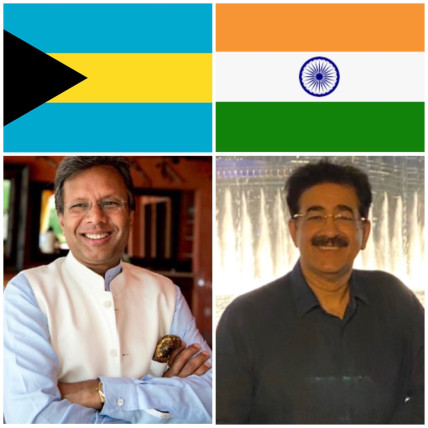 
New Delhi: “I on behalf of Indian Media and Entertainment Industry and Art & Culture Fraternity of India take this opportunity to extend my heartiest congratulations to Shri Ashish Saraf Hon. Consul General of Bahamas in India and the people of Bahamas on the occasion of Independence Day which falls on 10th July,” said Dr. Sandeep Marwah President of Marwah Studios and ICMEI- International Chamber of Media And Entertainment Industry celebrating the day at Chamber.

The Bahamas and India have always supported each other at various international and multilateral fora such as the United Nations. As of now, around 350 Indians reside in The Bahamas. The community is mostly made up of professionals, and are well integrated in Bahamian society. Around 2000 Indian tourists visited The Bahamas in 2019..

Not very long ago Indo Bahamas Film And Cultural Forum was formed to bring people of two countries close to each other through art and culture. All efforts have been made to interact between the cultural organisations. A festival of films from Bahamas has been designed to be launched immediately once Covid Position is normal in India. The country of Bahamas has been partners with International Film And Television Club, International Journalism Centre and Asian Academy of Arts in all the major events including Global Film Festival, Global Festival of Journalism, Global Literary Festival and Global Fashion Week.

Hire an expert to write a paper for you at writers per hour.
To ensure stability and reachability of your applications at all times, remote DDoS protection can keep your hosting services online
Learn about online entrepreneurship at JohannesLarsson.com