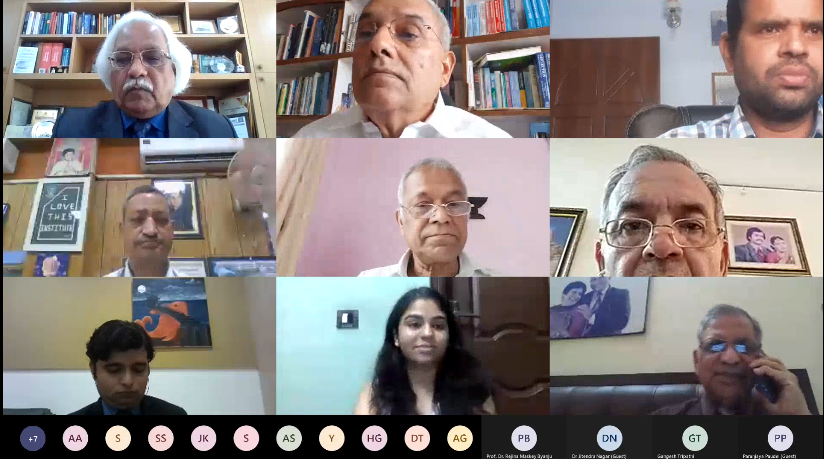 
International Seminar on “Air Pollution & Climate Change: Research, Mitigation, Technologies and Policy Making as Celebration of World Environment Month” was conducted by Prakriti Ecotech under its parent organization, Prakriti Group of Companies, in collaboration with Nepal Energy and Environment Development Services (NEEDS) and Gurukul Global Knowledge Foundation. The seminar was organized to discuss and debate on ongoing climate crisis and burning problem of Air Pollutionin India, Nepal and Bangladesh. The seminar focused on the sharing of results from different research works done on air pollution in these neighboring countries of Indian Sub-Continent to build an International policies and innovation of new technologies to control Air Pollution and to mitigate the effects of anthropogenic climate change. The Seminar was inaugurated with the opening remarks of the Special Guest of the Seminar, Prof. P.B. Sharma, Hon’ble Vice Chancellor Amity University Haryana, Founder Vice Chancellor, Rajiv Gandhi Proudyogiki Vishwavidyala and Delhi Technological University, and Former President, Association of Indian Universities in august presence of the Guest of Hon’ble Er. Ganesh Shah, Former Minister for Environment, Science and Technology, Govt. of Nepal, Mr. Shubhansh Tiwari, Founder President of Prakriti Group of Companies, Mr. Bhupendra Das, Chairperson NEEDS, Distinguished Invited Speakers, Guests, officials from Prakriti Group of Companies, NEEDS, GGKF and participants from India, Nepal and Bangladesh.

Delivering his opening remarks Kulpati Prof. P.B. Sharma, Hon’ble Vice Chancellor Amity University Haryana, Founder Vice Chancellor, Rajiv Gandhi Proudyogiki Vishwavidyala and Delhi Technological University, and Former president Association of Indian Universities, said by quoting former US President John F Kennedy as “Man belongs to earth; earth does not belong to Man therefore if do not take care of mother earth we cannot survive. Good quality of water & air is the essential for our soul. We must pay attention to it. That’s the way we can live. He stated that “we have to prepare ourself & younger generation to save mother earth using science & technology it will be helpful for future era to preserve theenvironment. Prof Sharma remembered the old days of his childhood and said “we re-used the waste for our need. We creates tremendous amount of waste which causes harmto environment.We have to recycle the waste”. He quoted “Corona gave us the wake-up call.” He stated that the condition of rivers is so pathetic even in holy city of Varanasi. He said “we (scientists) have to step up from laboratory to help earth to resolve these issues. Covid have reminds us that Nature have that much power to heal himself if we do not catalyzes the process of pollution. Weshould have to learn this from this pandemic situation”. We required 10 times more attention to this. We have to return to basicsand to think what is important for our environment. Spirituality& Sciencehave to go together for better future. The future which will a society full of climate justice in which no one will left behind as everyone will get fresh air to breath, pure water to drink, healthy food to eat.The society in which prosperity and happiness will exist together. We have to come forward for green & bright future,” said Prof. Sharma.

Prof. RejinaByanju, Head, CDES, Tribhuvan University, Kathmandu, Nepaladdressed the gathering by commenting on the fact that “Transport sector is growing most rapidly around the world in line with the urban and socio-economic growth, which is contributing to severe air pollution”; and that “Air pollution has been of much concern mainly due to bad air quality, human exposure, public health, climate change, and visibility reduction”. Dr J Panda, Associate Professor, NIT Raurkela added that Basic aspect what we see around us like vehicleinduced air pollution and use of electronic vehicle.

Mr Bhupendra Das, Air Quality and Clean Energy Specialist and Chairperson (NEEDS) stated A current threat of air pollution due to open burning in Nepal. He said “According to Health Effect Institute the country rank 2nd most polluted in the world in terms of PM 2.5 concentrations. Almost 50% of Asian countries having PM2.5 concentration ranging from 62.6-83.3ug/m3. Satellite detected 41000 fire hotspots in Nepal between Jan 1, 2021 & Apr 7, 2021. India & Nepal have almost same pollution concentration. Air pollution is the 4rth leading risk factor for early death worldwide in 2019 surpassed only by high blood pressure.PM2.5 is now considered as highest threat. Annual death due to PM2.5 in 2019 were 980000(India), 22000(Nepal).

Shri Shubhansh Tiwari, Founder President, Prakriti Group explained about the geologic history of the earth and explains how the climate change was always an ultimate reason for all the five mass extinctions. He said that the mass in case of earlier mass extinction the climate was change naturally but now the anthropogenic activities catalyzes the process of natural climate change and makes it anthropogenic climate change. He also if the nature will change the climate the nature will balance like nature detoxed everything from pollution during last year’s global lockdown. He quoted a famous novel and movie Jurassic Park and said “we have to understand that the planet is not in jeopardy, we are in jeopardy and we have to solve this problem for our own existence and not for anyone else. He further said “all in all previous mass extinctions, 96% of species were extinct and if we will get extinct in future there will be no effect on the planet. The life will still be present in some other form but maybe we will not be there. The humans are the only specie of the Blue Planet in complete geological history which is causing the 6th mass extinction and going to extinct itself. For me it is highly questionable now to say The Humans are the most Intelligent Specie of the Earth”.

The Seminar was ended up with Vote of Thanks- delivered by Mr. Gangesh Tripathi, Vice President, Prakriti Group. Whilst addressing- he shows his thankful regard to Hon’ble Guest of Honour, Esteemed Dignitaries, and distinguished speakers and participants from India, Nepal and Bangladesh. He also thanked to Ms. Mehak Chopra for moderating the seminar. He also shows his warm regards to Kulpati prof. PB Sharma for his visionary guidance.

Hire an expert to write a paper for you at writers per hour.
Get your Explainer Video at 100 dollars only Today.
Buy 100% high-quality replica watches with a 2-year warranty and free ground shipping!