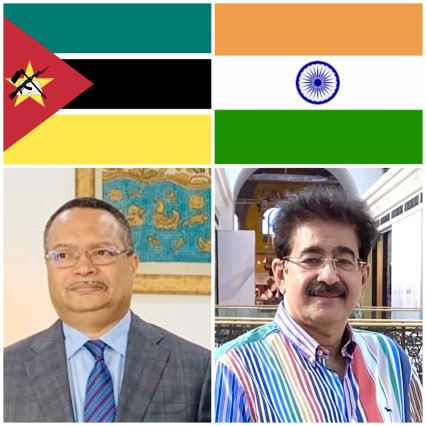 
New Delhi: “I on behalf of Indian Media and Entertainment Industry and Art & Culture Fraternity of India take this opportunity to extend my heartiest congratulations to H.E. Ermindo Augusto Ferriera High Commissioner of Mozambique to India and people of Mozambique on the occasion of Independence Day which falls on 25th June,” said Dr. Sandeep Marwah President of Marwah Studios and ICMEI- International Chamber of Media And Entertainment Industry celebrating the day at Chamber.

It was way back in 2015 when H.E. Jose Maria Morais High Commissioner of Republic of Mozambique in India visited International Headquarters of ICMEI and a committee on Mozambique under the name and banner of Indo Mozambique Film and Cultural Forum was announced.

“After the visit of High Commissioner, we have been lucky enough to invite officials and many delegates from Mozambique have been attending different International Summits organised by ICMEI from time to time. We want to take our relations with Mozambique to new heights through art and culture,” added Dr. Marwah.