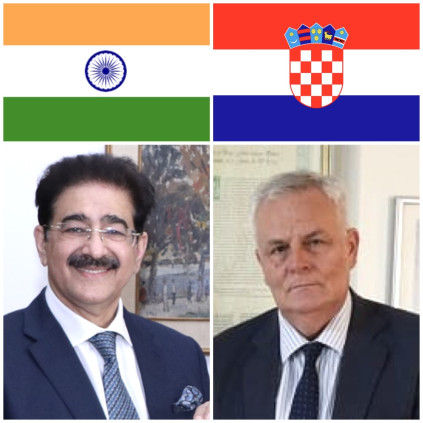 
New Delhi: “I on behalf of Indian Media and Entertainment Industry and Art & Culture Fraternity of India take this opportunity to extend my heartiest congratulations to H.E. Peter Ljubicic Ambassador of Croatia to India and people of Croatia on the occasion of National Day which falls on 25th June,” said Dr. Sandeep Marwah President of Marwah Studios and ICMEI- International Chamber of Media And Entertainment Industry celebrating the day at Chamber.

Diplomatic relations between two countries were officially established on 9 July 1992 following Croatia’s independence from SFR Yugoslavia. However, Croatia has had a colonial past with India, through the state of Goa, stretching back 400 years. India recognized Croatia in May 1992 and established diplomatic relations with it on 9 July 1992. Croatia opened its resident mission at New Delhi in February 1995. The Indian Mission in Zagreb was opened on 28 April 1996, and upgraded to Ambassadorial level in January 1998.

Soon we will be requesting the Ambassador to formally inaugurate a committee under the name and banner of Indo Croatia Film And Cultural Forum to start developing people to people relation at a grass root level through arts and culture added Dr. Sandeep Marwah.

Go to Assignmentgeek.com and get your homework done.
Ged Online
Hire an expert to write a paper for you at writers per hour.