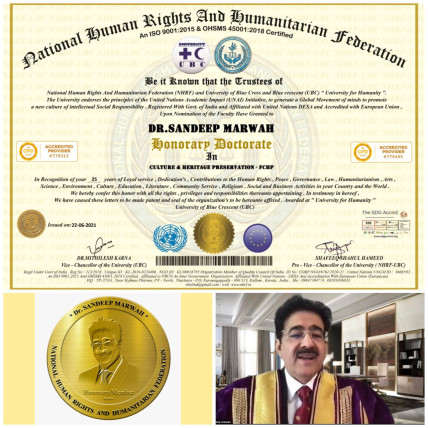 
New Delhi: “Sandeep Marwah is a living legend. He has been an inspiration for millions. He has already been declared as Icon of the Decade. Founder of Noida Film City-the first of North and fourth in the country , Marwah Studios-the first professional studios of North India, AAFT-the first private film school and fourth in the country Sandeep Marwah is the producer of largest number of short films and has given opportunity to more than ten thousand film makers from hundred countries of the World, is another commendable work he has added to his profile,” said Dr. Shafeeq Shahul Hameed Pro Vice Chancellor of the University of Blue Cross and Blue Crescent-‘University of Humanity’ presenting Honorary Doctorate to Sandeep Marwah for his untiring contribution towards nation building.

Sandeep Marwah has been in media for forty years, Studio business for thirty years education for twenty-seven years and has brought India to a new stature in the World map of art and culture. He has been associated with more than 60 countries and has created more than 7000 events to high light Indian art and culture affiliation at a global level. His has entertained Two million people at Noida Film City under Film Tourism so far.

Go to Assignmentgeek.com and get your homework done.
There is no better press release writing company as 123 term papers.
Buy 100% high-quality replica watches with a 2-year warranty and free ground shipping!