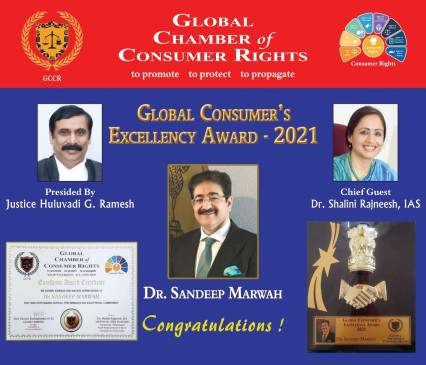 
Bengaluru: “Sandeep Marwah is a known international media person with seven World Records to his credit. He is the founder of Noida Film City, Marwah Studios, Chancellor of AAFT University of Media And Arts. He is the producer of largest number of short films in the World. Teacher to 19000 media professionals from 145 countries of the World he has been nominated Cultural representative of 54 Governments of the World. Recently designated as National Chairman of BIS Media and Entertainment Committee in Ministry of Consumer Affairs Government of India. He is the Chief Scout For India,” citation read by Rojn G Koshy host of the show.

Dr. Sandeep Marwah extended his heartiest thanks to the organizers and assure everyone that he will keep on cooperating and supporting all the activities which serve the people of our Nation.