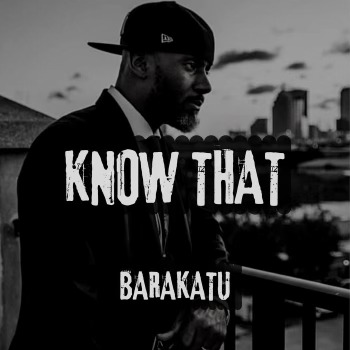 
Barakatu expresses his life journey and experience on the latest music release called "Know That". The track is available on Spotify, iTunes, Youtube, and dozens of worldwide music streaming platforms.

Atlanta, GA - June 2nd, 2021- Barakatu is thrilled to announce a captivating debut single called "Know That". The song was written by himself and released on worldwide music streaming platforms. "Know That" is currently available on Spotify, iTunes, Youtube, Amazon Music, TIDAL, and other streaming platforms.

Barakatu said that he wrote songs inspired by his life experience. POVERTY had led him to write and create music. "POVERTY, everything in the environment was toxic to the max, and this was the escape, the therapy, unknowingly! THE opportunity of expression without censorship, TEMPORARY FREEDOM or the illusion of it was better than none, I'll take that with fries!" said the rapper who just released his first debut single, "Know That".

"Know That" is Barakatu's first debut song on worldwide music platforms, and it has been listened to over 5000 times on Spotify. It is a song produced by a Soca Artist GBM Nutron who currently has almost 100,000 monthly listeners on Spotify. "New single "Know That" is a good starting point to immerse yourself in the Barakatu music journey”, said the artist. In addition to the released song, Barakatu also explains that his music is Innovative, Creative, Truthful, Trustful, No School, Youthful, and Unusual Beautiful.

Barakatu has a unique process to produce songs. He explained. "I groove to the beat, then get epileptic and have visions of where or how this energy applies to my life, then and there. Subsequently, I incorporated one of many crazy experiences, BONG."

His music is a composition of catchy beats with the message, "The majority of us are Hebrews, who made us children of Israel, we need to use our power of prayer and unity to Heal the World, but we can only do it together with GOD, THE ALL MIGHTY."

Barakatu is a rapper and songwriter. He is starting to get even more known through the internet and music streaming platforms. Barakatu's favorite music is the newest music he created as he feels like he gets better in every song and strives for that. He explained that if he could change the industry, it would be more unity. "WHATS NEXT FOR ME? FREEDOM INSHA ALLAH ( GOD WILLING)."

For more information about his new release song "Know That", please visit https://open.spotify.com/artist/7078H20qMpzf5W07j0Tcf5.

For Booking and Features

There is no better press release writing company as 123 term papers.
Learn about online entrepreneurship at JohannesLarsson.com
Buy 100% high-quality replica watches with a 2-year warranty and free ground shipping!