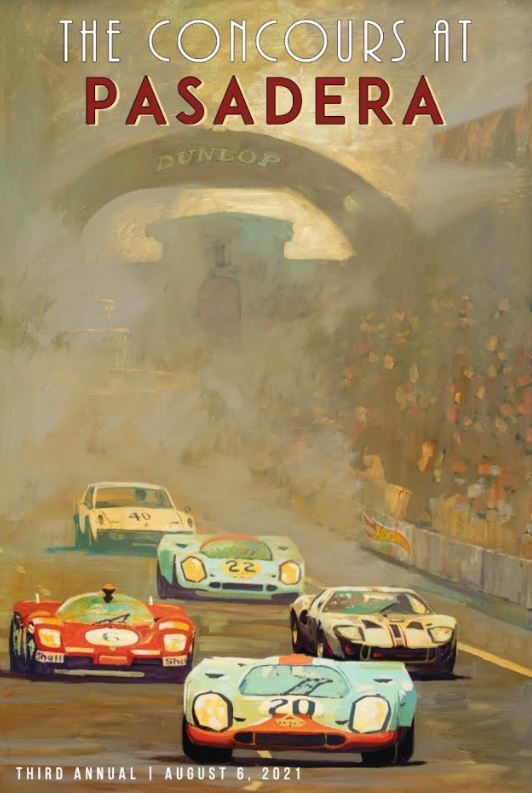 
Since 1923, an epic, day-long automobile endurance race near the tiny French hamlet of Le Mans has captured the imagination of fans around the world.

Monterey, CA, June 01, 2021 — Since 1923, an epic, day-long automobile endurance race near the tiny French hamlet of Le Mans has captured the imagination of fans around the world.

Le Mans has seen photo-finishes, horrific crashes, speed records and the height of automobile innovation. However, throughout the nearly 100-year-long history, the 1960s stand out among all the decades — and automotive artist Simon Bull has captured the spirit of it all in his painting titled “The Decade of Champions."

Bull’s painting will be unveiled at the Meuse Gallery on Ocean Avenue in Carmel, and sold during the Club 100 Dinner following the Concours. It could fetch as much as $40,000.

Born in England, Bull now lives in Carmel, where he runs Simon Bull Studios. Commissioned to paint the official Concours poster, Bull focused on the decade of the 1960s, which ushered in the golden age of racing.

Ferrari dominated Le Mans (1960-1965), with the late Phil Hill (who once lived in Monterey County) winning in1961. Then came Ford's four successive wins starting in 1966 (depicted in the “Ford vs. Ferrari” movie), ending the Ferrari domination. Following that streak, the ominous 917 Porsche won back-to-back years in 1970 and 1971 at Daytona and Le Mans (depicted in the 1971 Steve McQueen movie “Le Mans”).

Bull also produced the 2020 Concours poster “Ford vs. Ferrari” (18x24), which is available online at www.pasaderaconcours.com/2020poster. It is a limited edition with 500 pieces.

Set against the backdrop of a luxurious private country club and the Jack Nicklaus-designed Signature golf course, Pasadera provides an unequaled atmosphere of casual elegance.

Monterey Motorsports owner Rick Barnett will serve as master of ceremonies. Guests will vote for the People’s Choice Award from the Modern Classic category and returning exhibitors will exhibit a juried selection of Alumni vehicles from the 2019 Concours.

VIP tickets: Invited guests may obtain admission to the event by visiting pasaderaconcours.com/tickets.

Children 9 and under are complimentary with a ticket bearing adult.

Press Party (limited to sponsors, exhibitors and media), Tribute to LeMans, The Decade of Champions. Scenes from movie “Ford vs. Ferrari” and “Le Mans.” Note: Exhibitors are encouraged to arrive at 5 p.m. with their Concours vehicle (parking in the main courtyard).

The Club at Pasadera is at 100 Pasadera Drive in Monterey, between Monterey and Salinas off Highway 68.