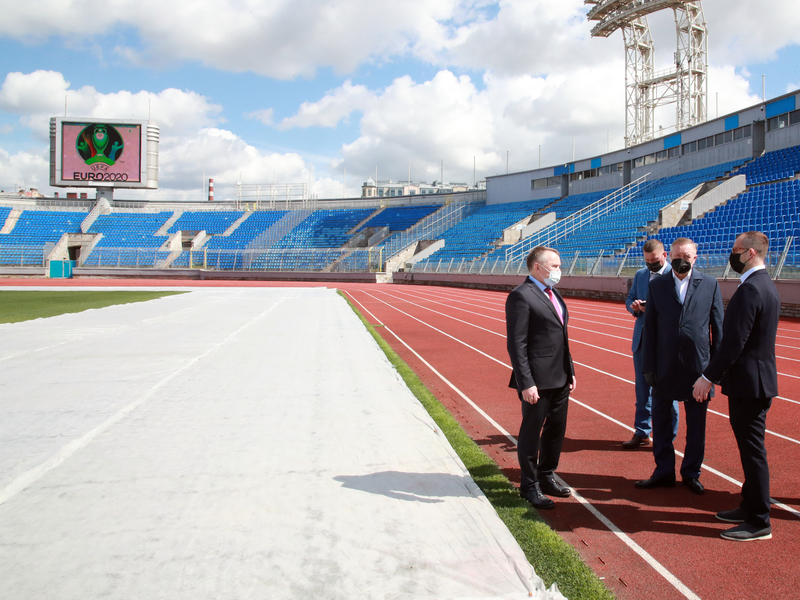 
The Gazprom Arena football stadium and training facilities are ready to host European Championship matches, said the Governor of St. Petersburg Alexander Beglov following the results of a working detour of sports facilities, which will be involved during the Euro 2020 games.

According to him, the epidemiological situation in the Northern capital of Russia is better than in other cities hosting the championship matches.

“More than half a million residents have completed the full course of vaccinations. This is the basis of collective immunity,” the governor said.

At the same time, Alexander Beglov stressed that such large events require special discipline, and urged residents and guests of the city to observe all precautions.

According to the Federal Tourism Agency, foreign fans will be able to enter Russia for the matches of the European Football Championship without visas. To cross the border, they will need a match ticket, a Fan ID and a negative PCR test result for coronavirus. Entry to Russia is possible from May 29 to July 2. Fans will be able to stay on the territory of the Russian Federation until July 12. Fan ID gives them the right to cross the border several times and does not restrict fans from moving around Russia. Tournament officials and other staff will be able to apply for a simplified entry process.

“In the current difficult conditions, the movement of people has been seriously reduced, and we met the understanding of the federal authorities and were able to open the border for those who are going to come to St. Petersburg for a football holiday in the summer,” said Alexey Sorokin, General Director of the organizing committee the European Championship in Russia.

“At the same time, it is very important to understand that we intend to hold the safest tournament possible – permission to enter Russia does not cancel the rules and measures that must be followed on the territory of Russia: in particular, a negative PCR test, and so on,” he added.

The permitted occupancy of the stands at the European Football Championship matches in the St. Petersburg arena is still 50%, but it can be increased up to 75% of the total stadium capacity, if the epidemiological situation allows it.

Euro 2020, postponed for a year due to the coronavirus pandemic, will be held from June 11 to July 11, 2021 in 11 European cities. Initially, four matches of the final part of the tournament were to take place in St. Petersburg – three meetings of the group stage, including two games with the participation of the Russian national team, and one of the quarterfinals. Due to Dublin’s refusal to host the tournament matches, the Group E games planned in the capital of Ireland were moved to the city on the Neva.

Commenting on the upcoming event, Kirstin Hallmann from German Sport University Cologne, Institute of Sport Economics and Sport Management, reminded that St. Petersburg has already a lot of experience with hosting a world-class tournament.

“During the World Cup, they also hosted many matches. Therefore, the St. Petersburg host will deliver a high standard, despite having more matches than originally foreseen,” she said.

At the same time Kirstin Hallmann expressed regret that Ireland will not host any matches.

Answering the question about the significance of this event for football fans around the world, the expert pointed to the likelihood of two completely different reactions.

“The Euro can be an agreeable change for the people from their daily routine during the pandemic on the one hand. Many people will appreciate the diversion. On the other hand, many other people might also question the tournament as they see the athletes privileged since they can play. In contrast, the people are still unable to play sports in their club due to the pandemic – this depends on the country regulations,” Kirstin Hallmann explained.

“However, generally, mega sports events facilitate a positive atmosphere in the short term,” she added.

In turn, Christina Philippou, Director of Postgraduate Courses in Accounting and Financial Management, University of Portsmouth, noted that the decision to switch games from Dublin to St. Petersburg, is primarily beneficial for the UEFA.