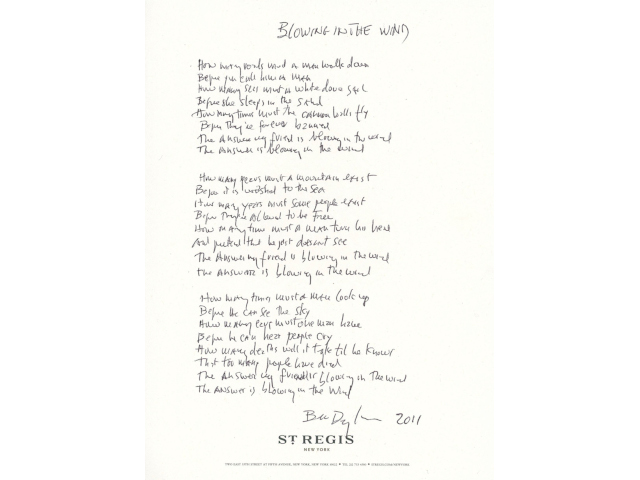 The entire catalog is up for viewing and bidding now, at www.IconicAuctions.com. Most of the items have been authenticated by James Spence Authentication (JSA), PSA/DNA, Roger Epperson/REAL Authentication, Beatles autographs expert Frank Caiazzo, Tracks UK, Beckett and BAS Guaranteed. Others still are accompanied by letters or certificates of authenticity.

The Dylan lyrics to Blowin’ in the Wind is an expected headliner. Penned entirely in Dylan’s hand in 2011 at the request of his longtime manager Jeff Rosen, the sheet (written on St. Regis New York stationery) is signed and dated at the conclusion. It is one of the finest offerings of lyrics ever to appear in public hands, and for a song from 1963 that is truly an American classic.

Anything related to the Beatles is of automatic interest to collectors, and this sale has two superb items. The first is a Paul McCartney stage and TV-worn collarless dark blue jacket, size 40, from 1963 and in a style that documents the end of the Beatles' leather jacket and blue jean phase, before D.A. Millings & Son of London assumed control of the Beatles’ newly refined dress style.

The other is a vintage 8 inch by 10 inch photograph, featuring the Fab Four in their iconic, collarless suits, signed by all four Beatles – John, Paul, George and Ringo – in 1963, in blue ballpoint ink. The photo was taken by Dezo Hoffman, the Beatles’ official photographer. Original Dezo Hoffman photos signed by the Beatles are rare and coveted by collectors.

The 2014 Fender sunburst Custom Shop Stratocaster guitar personally owned and played onstage by guitar legend Eric Clapton during his 2014 World Tour and 2015 performance at England’s Royal Albert Hall is accompanied by a certificate of authenticity from “Slowhand” himself, for ironclad provenance. The guitar was assembled specifically under Clapton’s technical guidance.

An original Atlantic Records pressing of the landmark rock album Led Zeppelin II from 1969, beautifully hand-signed along the front cover in ballpoint pen by all four members of the group – Robert Plant, Jimmy Page, John Paul Jones and the late drummer John Bonham – is certain to spark a bidding war. The rarity of a complete group signed Zeppelin album can’t be overstated.

For more information about the May 15th Amazing Music Auction, please visit www.iconicauctions.com.

To ensure stability and reachability of your applications at all times, remote DDoS protection can keep your hosting services online
Buy 100% high-quality replica watches with a 2-year warranty and free ground shipping!
Christian Homeschool Online