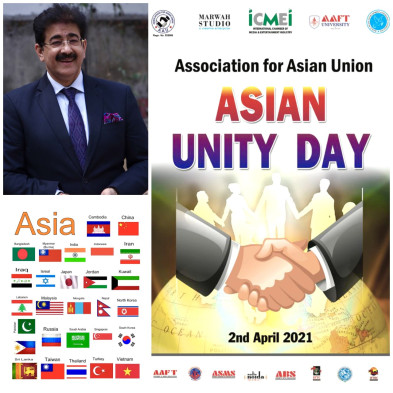 
New Delhi: “It has been now twenty-seven years we have been propagating the very important theme of Asian Unity since the inception of our first institution under the name and banner of Asian Academy of Film And Television,” said Sandeep Marwah President of Marwah Studios in an event organized by International Chamber of Media And Entertainment Industry to celebrate Asian Unity Day along with international press conference explaining the need of Asian Unity.

“It was 22nd July 1993 we inaugurated the institution and proposed a forum to bring in Love Peace and Unity through Art and Culture. We have always believed that it is necessary to have best of the relations between the Asian countries for their Political, Social, Economic and Cultural Growth and Peace,” added Sandeep Marwah.

“We are the first one in the World to start Asian Unity Day on 2nd April so that we can remind the people of this continent that we are one and together. Asian Academy of Film And Television further created an alliance- Forum For Asian Unity and trying to bring all the fifty countries together under this alliance,” expressed Marwah.

Sandeep Marwah has introduced many other organizations starting with the word Asia like Asian School of Media Studies, Asian Academy of Arts, Asian Business School, Asian School of Business, Asian Law College, Asian News Agency, Asian Institute of Hospitality and Tourism and now AAFT University where one or other way he has been promoting the concept of Asian Unity.