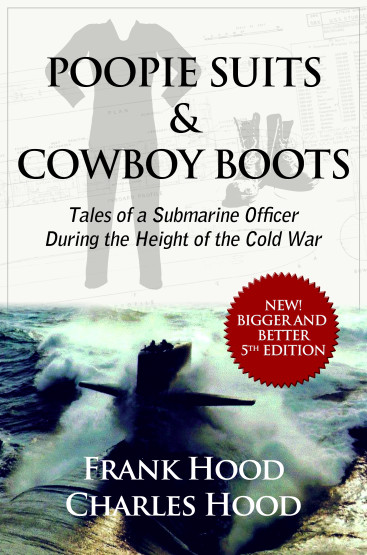 
Nashua, NH – USA | April 19, 2021 -- Poopie Suits and Cowboy Boots, now in its fifth edition since 2017, has earned a popular place in the modern submarine literature for its engaging style and pacing, also for its unique approach. Cloak and Dagger suspense was set aside. As were strictly technical descriptions of submarine operations. Instead -it is a human story, set in the throes of the Cold War during the Nixon administration. It follows the journey of Frank Hood through extensive training and eventual deployment as a junior officer aboard the fast-attack submarine (USS Seahorse [SSN-669]). Passing 4,000 copies sold, 83% of the 107 reviews on Amazon are 5 or 4 Star. Poopie Suits has also been named as the 6th Best Book in The World on Submarines for 2021 by The Book Authority – https://bookauthority.org/books/new-submarines-ebooks

Written almost 50 years after Frank’s service, the earlier versions contained some small errors in recall of some of the details of submarine operation. These legitimate complaints were addressed in this new version.

This 5th and final edition has additionally been extensively updated and expanded. Based on feedback from more than a hundred submarine veterans, details have been corrected and updated. These include the educational narratives about prototype training and nuclear reactors. In fact, the entire discussion of how a submarine generates propulsion from nuclear power has been rewritten with improved clarity. Also, both the glossary of submarine terms and the photographic gallery have been significantly expanded. The new photos include a brand-new original schematic diagram of the Control Room of the Seahorse to aid in comprehension of the expanded submarine “walk-through” in Chapter 8.

Additional small historical details have been added in many places to enhance the reading experience. Starting with the 2nd Version, short Interlude Stories about significant milestones in US Submarine history were included. Now, a new interlude story (“Nautical Rules of the Road”) has replaced the former entry about the collision of the USS Tullibee; that story now appears in our book More Sub Tales.

The final product is the best effort yet in telling Frank’s compelling coming-of-age story during the contentious 1960s. While biographical in form, Frank’s story serves as a scaffolding of sorts to allow detailed side explorations of the basics of US submarine history; fundamental submarine systems such as sonar, propulsion, diving, weapons, and periscope functions; the intense training and repetition required to gain qualification in submarines; and the colorful traditions of the US Navy. The book is replete with dozens of funny stories as well. It is an enjoyable story that not only informs and educates the reader of what it was really like to live on a hot running nuclear submarine, but also includes several cultural references that made life during that turbulent period both difficult and memorable.

It was written in a way that appeals to both the career Navy man/woman and the interested civilian. The reader is guaranteed to learn a lot about the Silent Service and will come away with a great deal of respect for the men (and women) and their missions that continue to this day with no fanfare and little public awareness.

About Poopie Suits Series of True Submarine Stories:
Poopie Suits is a self-publishing group of 2, brothers, who started by detailing the submarine service of Frank Hood during the late 60’s to early 70’s. This book takes the reader on the journey of a young man who volunteers for submarine service and includes historical and cultural touch points of the era, including the Vietnam War, political unrest and assassinations, the nascent space program, and more. Richly detailed by co-author Charles Hood and written in a language that anyone can understand, it does not touch on any classified information.

Programming assignment help at ProgrammingGeeks
To ensure stability and reachability of your applications at all times, remote DDoS protection can keep your hosting services online
GreenPromoCode.com: Promo Codes in Real-Time
Ged Online
Go to Assignmentgeek.com and get your homework done.