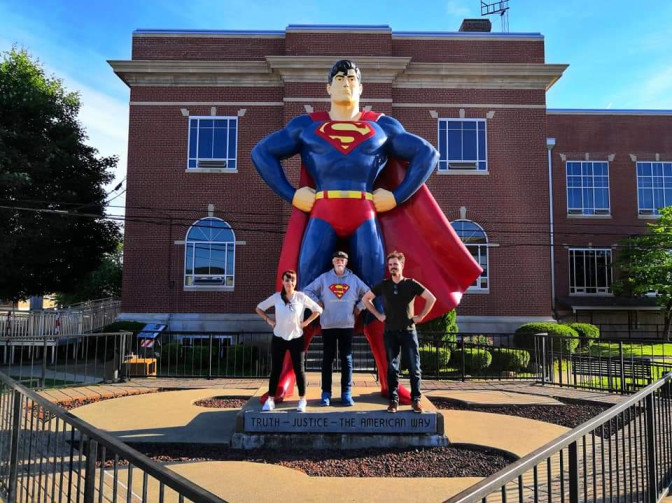 
Boscoreale, Italia | April 13th, 2021 -- Boscoreale City Seal was just recently engraved in the heart of the Superman Brick of Fame in Metropolis, Illinois, United States brought to the States thanks to the personal efforts and far-sightedness act of Italian - American artist originally born in the lands of Vesuvius, who grew up as world citizen: Veronica Vitale and film Director Patrick Hamilton.

Today, this little Italian town located in the Parco Nazionale del Vesuvio, under the slopes of Mount Vesuvius, is stepping to the forefront as for the first time in history a sensational international covenant of friendship has been forged between the City of Boscoreale, Italy, the Super Museum and City of Metropolis Illinois, United States of America.

Notwithstanding the fact that many Frescos and Ancient Villas of Boscoreale buried and preserved by the eruption of Mount Vesuvius in 79AD (43-30 BCE) are on display at the Metropolitan Museum of Art in New York, no-one before today, suggested or has attempted to take the Boscoreale City’s Seal (Stemma del Comune di Boscoreale) overseas but Veronica Vitale, which also is a visionary music executive currently based in Atlanta, Georgia and Los Angeles, California.

This inspiring story of fortitude and gratefulness to one's motherland unfolds over the course of the expedition on – the - road "25.000 Miles Across America" and the making of the documentary "Inside The Outsider” undertaken by the Italian artist and her husband, American film director Patrick J. Hamilton.

Along the way, the young couple came across a very surprising and unexpected meeting with Mr. Jim Hambrick, his daughters Morgan, Jessie Jane, Karie and the world famous Superman Museum officially opened in 1993 in the Man of Steel's official hometown of Metropolis, Illinois on Superman Square. And so, one afternoon in June 2019, this remarkable group made of pop culture enthusiasts, and proactive patrons of today's heritage for the sake of tomorrow's generations, carried out a project of "Friendship City" with positive blessing from the Mayor Billy McDaniel and Mayor Dr. Antonio Diplomatico.

“We were so pleased and honored to meet Veronica and Patrick. They have stayed in constant contact and we feel like we've made lifelong friends. I couldn't be happier about the collaboration between the two cities. It is nice to know that we have a piece of our town in Italy and your city has a piece here. My Father Jim Hambrick is running for mayor in the upcoming election voting happens on April 6th 2021. His goals are to extend the Superman theme throughout the city and improve the quality of life for both residents and visitors while our goals with the museum are to preserve and honor Superman and all the historic relevance of the memorabilia.” – says Mrs Morgan Hambrick

“Some People say: - "Bloom there where you’re planted" - but If we stick in the same pot of soil where we were planted, we’ll remain nothing but contained little bonsais as opposed to the great trees we were meant to become. I go instead with "Don't forget your roots. This is where flourishing occurs." My hometown Boscoreale, for one thing, (which means “Royal Groove by the way…) had no faith in me however I never left it behind. I never forgot it. I grew up in an place of great oppression and strife for my dreams, here there's a great dispute between envy and hubris and a certain "know – it – all" attitude that doesn't bring out younger talents, but suffocates them until eventually they all fade away. Despite it all, I never forgot my roots, my background and the place I come from. I don't think it was easy for Clark Kent either. He was a journalist who was laughed at, bullied, and mocked for his talent and yet, He would still wear the superman suit to do good. “Do good to others and every man can be a Superman.” People need to understand that Dreams lift us up and transform everything that surround the Dreamer, into something better but dreamers also must remember that “The 'Amazing' can only be created by facing fear, risk, failure and great opposition during the process. – says Veronica Vitale

The day She received her tribute on the Brick of Fame located on Superman Square, Veronica asked for the Boscoreale City’s Seal to be added first, and that never happened before in her town local history. Today, April 10th 2021, a prestigious lava stone panel carved out of volcanic land from the Vesuvius, was placed at the entrance to the Town Hall and City Council of Boscoreale followed by a bone-chilling inspiring statement placed at the very bottom of it - “If you stop believing in heroes, the hero within you dies."

Ged Online
Hire an expert to write a paper for you at writers per hour.
Programming assignment help at ProgrammingGeeks
To ensure stability and reachability of your applications at all times, remote DDoS protection can keep your hosting services online