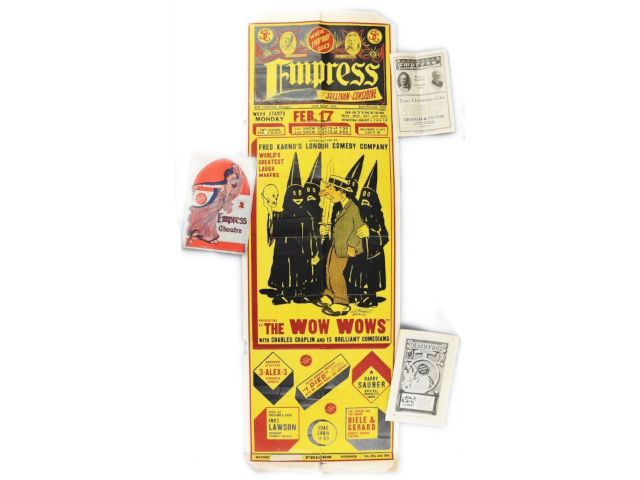 
Fullerton, CA, USA, April 14, 2021 -- One of the earliest and rarest Charlie Chaplin posters to ever come to market, produced in 1913 when Chaplin was still a vaudeville performer and aspiring young comedian, sold for $12,810 in a live online auction held March 14th by Appraisal & Estate Sale Specialists, Inc. The poster was the top earner of the 633 lots that came up for bid.

“We were very pleased with the outcome of this auction,” said Dan Wilson, a co-owner of Appraisal & Estate Sale Specialists, Inc., along with Suki Hilger. “The market is picking back up and we are seeing items achieve higher prices. The Charlie Chaplin poster exceeded past auction results and all expectations. It went to a collector who will cherish it and take care of it forever.”

The poster was a 42 inch long by 14 inch wide broadside advertising Fred Karno’s London Comedy Company and a show called “The Wow Wows”, starring Chaplin and other comedy performers. It was held at the Empress Theatre in San Diego, with performances on Feb. 17, 1913. It also marked one of Chaplin’s last-ever appearances in vaudeville.

“The Wow Wows” was a 29-minute show, performed in three scenes, the premise being Chaplin's character was told he would be initiated into a secret society, when in fact the others were getting revenge on him. The comedy debuted in 1910 in New York. Included in the lot were a few playbills that had some great advertising from the San Diego area.

The poster was made even rarer and more important by the inclusion of another cast member, a then-little-known comedian named Stanley Jefferson, who less than two years later would change his stage name to Stan Laurel and go on to form half of one of history’s greatest comedy teams: Laurel and Hardy, along with partner Oliver Hardy.

Following are additional highlights from the auction, which attracted 9,800 registered bidders on LiveAuctioneers.com. The catalog was packed with fine art, jewelry, antiques, furniture and more than 100 lots of Hollywood memorabilia, spotlighting dozens of major stars from stage and screen. All prices quoted in this report include a 22 percent buyer’s premium.

Appraisal & Estate Sale Specialists, Inc. has two auctions lined up for May. The first, on Sunday, May 2nd, at 12 pm Pacific time, will feature a large collection of railroadiana, trains (scale model and toy trains), vintage toys, signed sports memorabilia and a nice collection of Invicta watches.

The second auction, on Sunday, May 30th, also at 12 noon Pacific, will contain a fine selection of artwork from around the world, to include collections of Japanese woodblock prints, Asian antiques, antiquities, ethnographic art, mid-Century items and European antiques and paintings.

Go to Assignmentgeek.com and get your homework done.
Buy 100% high-quality replica watches with a 2-year warranty and free ground shipping!
Christian Homeschool Online
Online assignment help by Copycrafter will free you from any academic issues