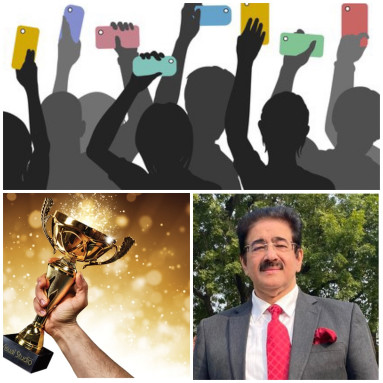 
New Delhi: The management of IJC-International Journalism Centre and Marwah Studios constituted another award for the citizen journalist to be presented for the first time during the 9th Global Festival of Journalism Noida 2021 scheduled for 12th to 14th February this year.

“We are feeling honoured in declaring a special award for all those women who all have adapted and performed as citizen journalist especially during last ten months of Pandemic. On research we found that these women have not only started but have covered sometimes more than 100 interviews of different personalities from different strata of life and broadcast them on assorted social media. They deserve an appreciation as they kept the wide audience busy during pandemic,” said Dr. Sandeep Marwah President of Marwah Studios and 9th GFJN.

A list has been prepared and handed to over to the jury for final results. Soon the names of the sincere workers will be declared for this Marwah Studios Excellence in Citizen Journalism Award. The award is going to elevate the level of the festival.

Ged Online
Learn about online entrepreneurship at JohannesLarsson.com
Buy 100% high-quality replica watches with a 2-year warranty and free ground shipping!
To ensure stability and reachability of your applications at all times, remote DDoS protection can keep your hosting services online