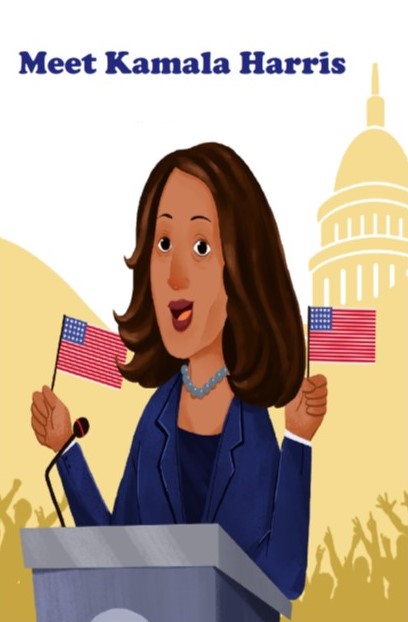 
Vice President-elect Kamala Harris is an inspirational figure, especially for women in 2020. Author Nia Hence to release a nonfiction children’s book of Kamala Harris and will be available on online book distributors.

Children are literally learning good things and bad things from their role models. For many children, their role models are adults around them. They can be their parents, grandparents, or caregivers. Good role models can shape their behavior, their relationships with others, and how they deal with problems in the future. Some parents want to help their children choose their role models, whether through good education or providing them with quality reading materials that can shape their character and personality from childhood.

Nia Hence, is a children book author who will release inspirational books for children. She wrote the Kamala Harris biography as an inspirational role model for children. Kamala Devi Harris is a Vice President-elect of the United States of America. She is the first woman, first black, and first South Asian woman to become Vice President of the United States.

Kamala Harris was born on October 20, 1964, in Oakland, CA. She was born to a Jamaican-born father and an Indian-born mother. She is the first child in her family. Her father, Donald Harris, was a professor, and her mother, Shyamala, was a cancer researcher. Kamala was raised in a multicultural family. Her mother taught her to embrace her father's and mother's culture. She attended both Black Baptist Church and a Hindu temple. Kamala had a good personality when he was a child. She often brings her black friends to her home and introduces her family's culture, sharing Indian food or painting Henna on their hands. Kamala was a good child in school; she traveled on a long bus ride across town to get to school every day.

"You may be the first to do many things but make sure you're not the last." - Shyamala Gopalan Harris (Kamala's mother)

Kamala graduated from Howard University, majored in political science and economics, and joined the sorority Alpha Kappa Alpha. She finished law school at California Hastings College of Law and then became a lawyer and later California's first Black woman District Attorney. Kamala married Doug Emhoff, an American lawyer in 2004 and has two children.

Online assignment help by Copycrafter will free you from any academic issues
Buy 100% high-quality replica watches with a 2-year warranty and free ground shipping!
Pay someone to write my research paper at Rapidessay