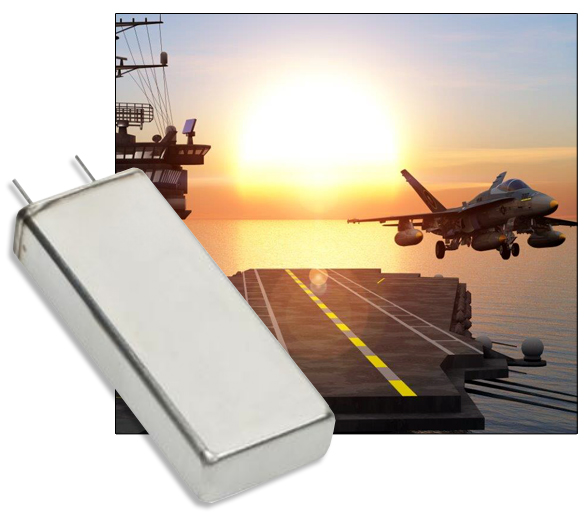 
Northvale, New Jersey, USA – Featuring a high capacitance at high voltages and temperatures, the NHR-Slimpack Capacitors released by New Yorker Electronics have a 3,000-hour life at full-rated conditions and withstand up to 80g vibration. Tested for altitudes up to 80,000ft, the series meets the most demanding military, aerospace, industrial, and down-hole applications.

According to manufacturer Cornell Dubilier Electronics (CDE), the long-life film capacitor series is poised to replace costly banks of wet tantalum capacitors with considerable size and cost advantages over series-parallel capacitors. Type NHR is a spin-off of the company’s Flatpack series that has been proven in military and aerospace applications for nearly 30 years. The company claims it has had considerable success in helping customers replace large series-parallel banks of wet tantalum capacitors with fewer components, saving valuable space, weight and cost.

Able to withstand operating temperatures from -55°C to 150°C, NHR aluminum electrolytic capacitors are constructed with rectangular stainless-steel cases and laser-welded covers that prevent dry-out. Components within the NHR series are available from 75Vdc through 300Vdc with capacitance values ranging from 60µF to 960µF. There are four case lengths available in 0.5in increments from 1.5in to 3.0in. All cases measure 0.5in thin by 1.0in wide. The series has a load life of 3,000 hours at 150°C, withstands up to 50g vibration on the three largest cases and up to 80g on the smallest case size.

Potential applications include any high-performance circuits that require large capacitance bulk storage and filtering at high temperature. These include power supplies and inverters for avionics, military electronics and such energy industry applications as down-hole recording devices.

About New Yorker Electronics
New Yorker Electronics is a certified franchised distributor of electronic components, well known for its full product lines, large inventories and competitive pricing since 1948. It is an AS9120B and ISO 9001:2015 certified source of passive components, discrete semiconductors, electromechanical devices, Flash & DRAM modules, embedded board solutions, power supplies and connectors, and operates exclusively at heightened military and aerospace performance levels. New Yorker Electronics operates in strict accordance with AS5553 and AS6496 standards in its everyday procedures to thwart the proliferation of counterfeit parts. It is a member of ECIA (Electronics Component Industry Association) and of ERAI (Electronic Resellers Association International).

Learn about online entrepreneurship at JohannesLarsson.com
To ensure stability and reachability of your applications at all times, remote DDoS protection can keep your hosting services online
Buy 100% high-quality replica watches with a 2-year warranty and free ground shipping!
Online assignment help by Copycrafter will free you from any academic issues
Ged Online