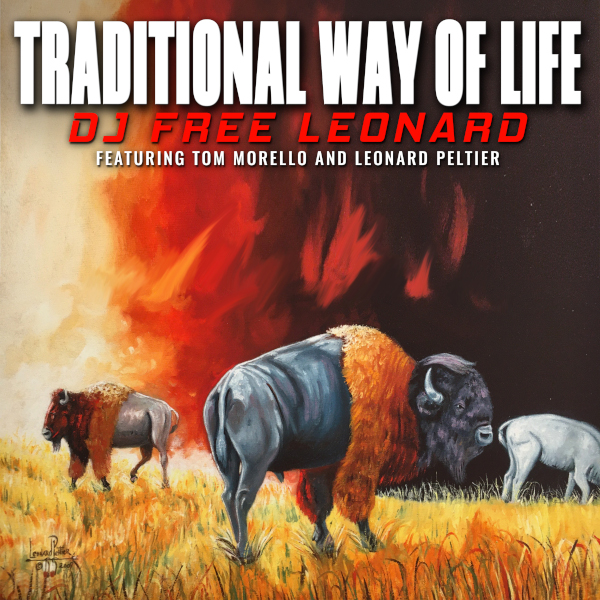 
Oakland, CA, Jan 12, 2021 -- Iconic Rockstar Tom Morello teams up with DJ Free Leonard(Recording Artist) to release a new song “Traditional Way of Life” in hopes of Freedom for Leonard Peltier, an Indigenous Political Prisoner through a Presidential Pardon. Leonard Peltier has served over 44 years for aiding and abetting in the deaths of two FBI agents, during a shoot-out in 1975, in which the prosecutor of the case has most recently urged former President Obama to exonerate Mr. Peltier due to a false conviction including the use of false affidavits and coerced testimony. Mr. Peltier’s lawyer has been in attendance at the White House over the past year for the Prison Reform meetings in which the Clemency campaign has been presented to President Trump to right this wrongful imprisonment.

“Traditional Way of Life” was written, produced and performed by DJ Free Leonard, the 1st cousin of Leonard Peltier, who collaborated with Tom Morello for the 1st time, creating a record that articulates many injustices with spoken word lyrics by Leonard Peltier himself as well as DJ Free Leonard, who duals as a Poet from Oakland, California. “With my verse, I wanted to convey some major legal precedents being violated such as double standards towards Tribal members, the Justice system not always being impartial without biases and Constitutional laws stemming from this case taking place on the Pine Ridge Reservation, Sovereign tribal land including the historical atrocities committed against Indigenous People.”

This must-hear song is slated for release on January 8th, 2021 on DJ Free Leonard’s Bandcamp page as a Free Download as well as All Digital Music Platforms. A special Press Conference with DJ Free Leonard(Tom Morello will not be in attendance) has been announced on January 6th, 2021 at 9:00AM Pacific Time. RSVP using the contact information below.

For Press Inquiries or to RSVP for the Press Conference Contact:
Carol Powell
510-737-9806
HumanWritesMusicGroup@gmail.com
http://www.HumanWritesRecords.com