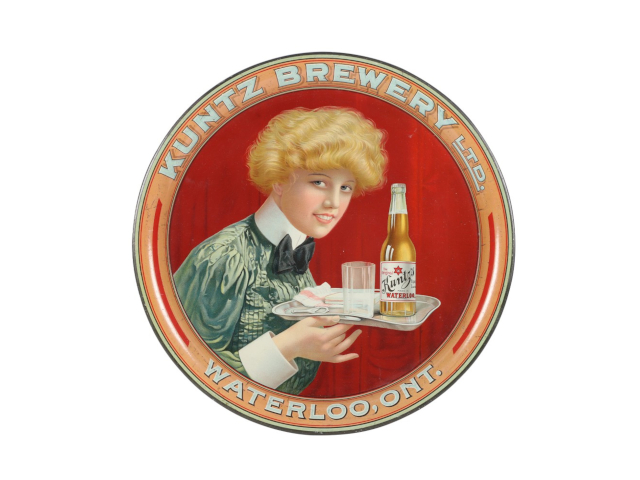 All prices quoted are in Canadian dollars and are inclusive of an 18 percent buyer’s premium.

“The Paces Races slot machine blew us away,” said Ethan Miller of Miller & Miller Auctions, Ltd. “There’s only a handful known. This one was masterfully restored, both cosmetically and mechanically, and it worked flawlessly.” When the game of odds was introduced by Pace Manufacturing in the 1930s, it became the largest money-making machine of its kind.

The Black Cat Cigarettes porcelain sign, measuring 50 ½ inches by 48 inches, is widely seen as one of the most attractive porcelain signs in Canadian advertising history. A green-eyed black cat was shown with the statement, “They taste better”, with “Black Cat Cigarettes” in script beneath that. It was marked “St. Thomas Metal Signs” on the lower edge and only had minor blemishes.

The auction was packed with 712 lots of advertising signs, toys, breweriana, coin-ops, historic objects, general store, agricultural collectibles telephones and more. “Advertising is as hot as ever,” Mr. Miller said. “There’s a tsunami of interest in good, authentic advertising. Key pieces met or surpassed our expectations. This sale was the perfect storm. People were going crazy.”

Following are additional highlights from the auction, which grossed $515,188 (including the buyer’s premium). The sale attracted 671 bidders, who placed a total of 10,393 bids online, via LiveAuctioners.com and MillerandMillerAuctions.com. Nearly 60 percent of lots brought prices that met or exceeded estimates, while 26 percent of lots surpassed even the high-end estimate.

A C. Cretors & Co. floor model popcorn and nut machine, made in the U.S. in the 1910s, finished at $5,842. The machine featured a steel frame case with wood trim doors set with beveled glass. It was professionally restored, to include refinished wood trim, repainted case and nickeled trim. The top had two electric lights and an animated clown that turned a glass cylinder.

Breweriana collectors were entranced by the many rarities in the lifetime beer tray collection of Andy Cottrell. “Andy’s breweriana was eagerly soaked up by the veteran collector community,” Mr. Miller remarked, adding, “You know when the ‘old guys’ raise their eyebrows that you’re selling a special collection.” A few top-sellers from the collection included:

There is no better press release writing company as 123 term papers.
Christian Homeschool Online
Pay someone to write my research paper at Rapidessay
Ged Online