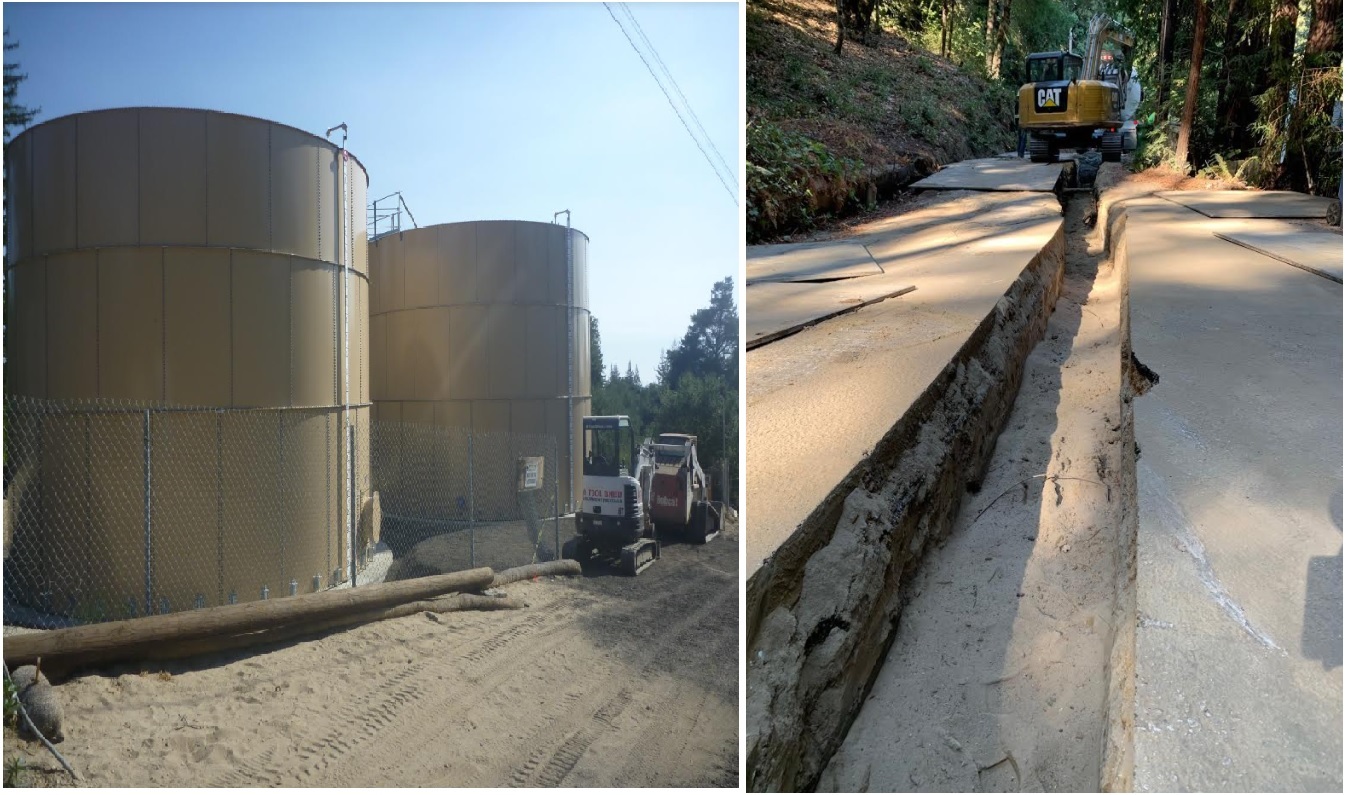 
The San Lorenzo Valley Water District (SLVWD) is in the process of replacing three undersized and leaking redwood tanks in Lompico, as well as of replacing 3.3 miles of pipeline that were deemed inefficient, ineffective (due to age and size), and undersized for fire flow in Ben Lomond and Boulder Creek.

Boulder Creek, CA, November 24, 2020 — The San Lorenzo Valley Water District (SLVWD) is in the process of replacing six undersized and leaking redwood tanks in Lompico, as well as of replacing 3.3 miles of pipeline that were deemed inefficient, ineffective (due to age and size), and undersized for fire flow in Ben Lomond and Boulder Creek.

The Madrone tank site was completed in November and is now in use. The Lewis tank site has completed construction and is completing water quality sampling before being brought online for use. While the Kaski site is in the process of having its original tanks removed and will begin site grading in early December.

The tank replacement project was funded through a $2.75 million assessment district as part of the SLVWD/Lompico consolidation project.

The pipelines in Hillside Drive and Reynolds Drive has been constructed. The final steps of installing service laterals, fire hydrants and air relief valves has begun and should be completed mid-December 2020.

The pipelines in California Drive have completed the saw cutting of the trench line and potholing of existing services. Construction and installation of the mainline pipeline is in progress and estimated to be competed in January 2021.

While the pipeline in Quail Hollow Road required additional environmental permitting. The draft Initial-Study/Mitigated Negative Declaration (IS-MND) will open for public review in early December with construction slated for Spring 2021.

About the District
The San Lorenzo Valley Water District was established in 1941 as an independent special district. The District is governed by a five-member Board of Directors, elected at-large from within the District’s service area. A special district is a local government agency formed by voters to perform a needed service, such as water or sewer. The District’s boundaries comprise approximately 60 square miles and 190 miles of pipeline. The District currently provides service to approximately 7,900 residential, commercial, and institutional connections. The District relies on both surface water and groundwater resources, including nine currently active stream diversions, one groundwater spring, and eight active groundwater wells. The District owns, operates, and maintains two water systems from separate water sources. These sources are derived solely from rainfall within the San Lorenzo River watershed.

Go to Assignmentgeek.com and get your homework done.
Christian Homeschool Online
Buy 100% high-quality replica watches with a 2-year warranty and free ground shipping!
There is no better press release writing company as 123 term papers.