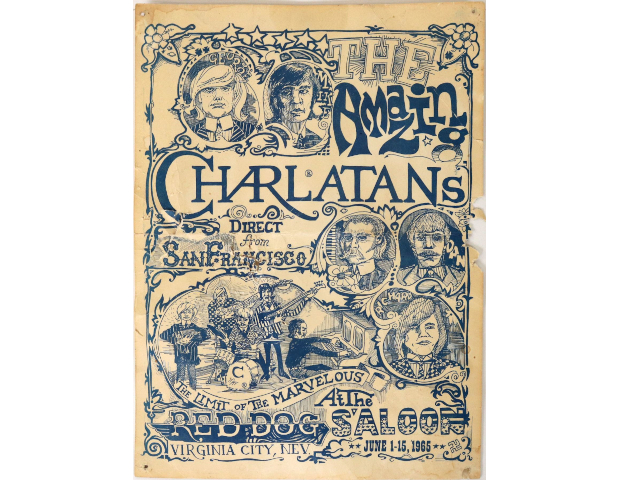 
Reno, NV, USA, October 22, 2020 -- Original artwork for what is widely regarded as the very first psychedelic rock poster – created in 1965 for the grand opening of the Red Dog Saloon in Virginia City, Nevada and advertising the acid-rock group The Charlatans for a series of dates that never happened – is an expected star lot in Holabird Western Americana Collections’ big, five-day Spooktacular Sale planned for Oct. 29-Nov. 2, online and live in the gallery located at 3555 Airway Drive in Reno.

Start times all five days are 8 am Pacific time. More than 3,600 lots in a wide array of collecting categories are set to cross the auction block. “We continue to get in marvelous collections of Americana from all over the country, and this auction features many amazing one-of-a-kind rarities and several long-awaited collections, like the ones for Ken Prag, Salvatore Falcone and John Reynolds,” said Fred Holabird, the president of Holabird Western Americana Collections.

The Charlatans concert poster will be offered on Day 1, October 29th, and has a pre-sale estimate of $10,000-$15,000. In 1965, when Red Dog Saloon owners Mark Unobsky and Chandler Laughlin made plans to open for business, they decided against a jukebox for music and instead wanted to enlist a house band. A friend suggested The Charlatans, a fledgling acid-rock group in San Francisco that had never even played a gig – just practiced. Oh, and dropped a lot of acid.

To advertise the event, one of The Charlatans, George Hunter, suggested a poster, only not the usual kind that featured publicity photos of the act. This one would be hand-drawn, in the style of an old circus poster, with the faces and names of the band members and the dates – June 1-15. Hunter himself did the artwork. Except The Charlatans were too stoned to keep the dates, so the shows had to be pushed ahead, to June 21st. As a result, another poster was created. The one in the auction, for the June 1-15 dates, is the original (“The Seed”), and is a psychedelic rock rarity.

Co-headlining Day 1 will be a classic 1960s 25-cent slot machine from the famous Nevada Club Casino, a classic slot for those who collect Tahoe items (est. $550-$650). The machine features the classic Jennings Indian Head in brass. Also offered will be a complete set (#1-169) of Classic Illustrated Comics (1941-1969). These comic books took classic stories from history and literature and made them more attractive to children and teenagers (est. $3,000-$6,000).

Pay someone to write my research paper at Rapidessay
Learn about online entrepreneurship at JohannesLarsson.com