Hariharan Shared His Experience of Music Industry with AAFT 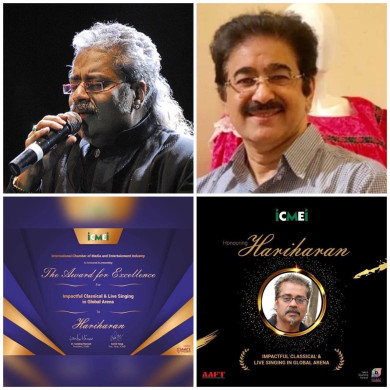 
New Delhi: “We are the music makers, and we are the dreamers of dreams.Music expresses that which cannot be said and on which it is impossible to be silent. Music produces a kind of pleasure which human nature cannot do without. The most exciting rhythms seem unexpected and complex, the most beautiful melodies simple and inevitable,” expressed Hariharan while talking to the students of AAFT School of Performing Arts.

“It is necessary for the students to have interaction with the professional from the industry to give them insight of what is actually happening in the World. The level of education and training goes up and students churn out much intelligent and smart at the end of the day,” added Dr. Sandeep Marwah Chancellor of AAFT University of Media And Arts.

Hariharan is an Indian playback bhajan and ghazal singer from Trivandrum, whose songs have been mainly in Tamil and Hindi. Also, he sang songs in Telugu, Malayalam, Kannada, Marathi and Bhojpuri films. He is an established Ghazal singer and one of the pioneers of Indian fusion music. In 2004, he was honoured with the Padma Shree by the Government of India and is a two-time National Award winner. He is regarded as one of the greatest Indian singers of all time.

Later Sandeep Marwah honoured Hariharan with The Award For Excellence For Impactful Classical & Live Singing in Global Arena on behalf of International Chamber of Media And Entertainment Industry.

On-demand assignment help - find an assignment experts in 3 steps.
BuyEssaysCheap.com - affordable writing help
Go to Assignmentgeek.com and get your homework done.
There is no better press release writing company as 123 term papers.
Online assignment help by Copycrafter will free you from any academic issues