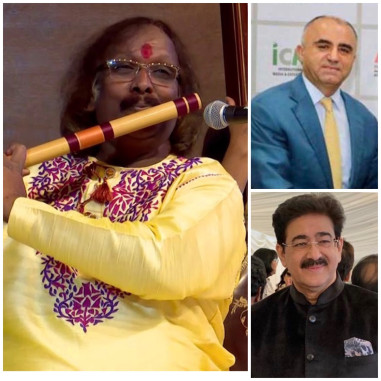 
New Delhi: An electrifying performance by Rajinder Prasanna was the most fascinating part of 6th Global Literary Festival Noida 2020 on web when the whole World was associated to the festival via different means and modes of social media on the last day of the festival.

The intimation of the festival was sent across to almost million people all over the World, More than 60 countries were participating in a well-designed 12 main and 12 sub events during three days of the festival. Around two hundred thousand people visited the festival where more than seventy thousand viewed the programs.

Sandeep Marwah founder of Noida Film City and President Marwah Studios presented one of the most prestigious Atal Bihari Bajpayee National Award For Promotion of Art And Culture to Rajinder Prasanna for his untiring contribution to art and culture especially to music.

Present on the occasion in the capacity of Chief Guest H.E. Armen Martirosyan Ambassador of Armenia to India said,”Art and culture is the straight link to the heart of people.We must learn to respect the art and culture of other countries. It is another way to learn about people of the country,”.

Rajendra Prasanna is an important figure in the world of Indian music and culture. He is foremost exponent of Bansuri & Shehnai and a celebrated artist recognized for his unique ability to perform on two instruments at a topmost level. It is indeed a very rare skill in the field of Hindustani music. He hails from Benaras and comes from a traditional family of musicians of renowned Benaras Gharana. He preserves, exercises and performs the old traditional music and arts of India which has been retained with his family since many generations.

Felicitated with Grammy Award certificate in 2004, Rajendra Prasanna became an international personality. He has performed across the globe, including appearance at renowned festivals and venues in many different countries of Europe, Asia, America, Africa and Australia such as Edinburgh festival in UK, UNO headquarters in Switzerland and WOMAD festivals in Australia, New Zealand, Sydney Opera House, Melbourne recital centre, Opera de Lyon (France) etc.