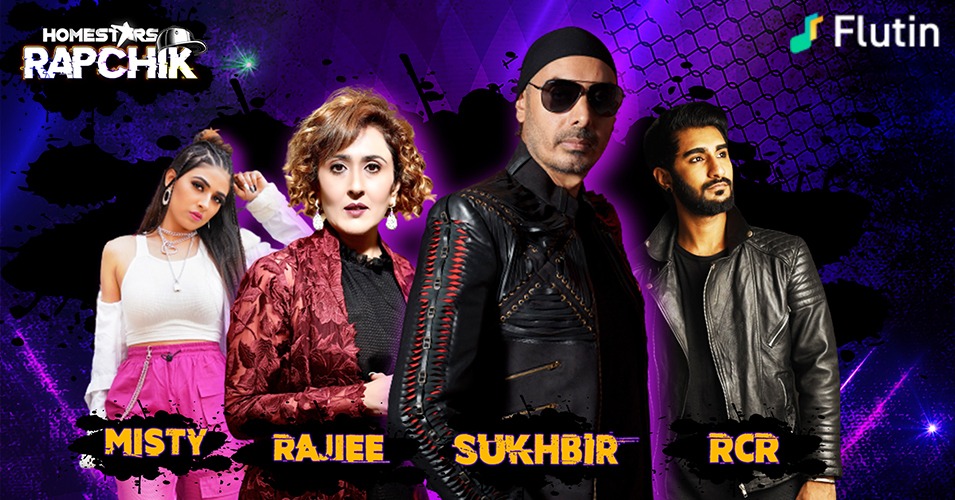 
New Delhi: After an intense musical Rap battle held over more-than-a-month-long period, Flutin has successfully concluded the latest edition of its virtual talent hunt for aspiring rappers of India. The show titled ‘HomeStars RapChik By Flutin’ was the first-of-its-kind, largest virtual/online competition in the country dedicated towards discovering and giving a platform to the “next big rap icons of the country”. Following the ‘Grand Finale’ featuring the ‘Top 3’ rap artists on the show, 27-year-old Kunal Jai Singhani aka ‘Kunaaaaaaal’ from Nainital has been declared the winner of ‘HomeStars Rapchik’, thus bagging the crown of “India ka Sabse Rapchik Rapper”; whereas Prithvi from Navi Mumbai and Pravesh from Bhopal emerged as the 1st Runner-Up and 2nd Runner respectively.

The show, which featured a grand prize pool of Rs. 1 lakh, was judged by some of the eminent personalities of the music and entertainment industry in our country; Popular Punjabi Singer Sukhbir Singh and Rajiee M Shinde, Music & Infotainment Veteran were the Grand Masters on the show, while Rapper RCR aka Rohit Kumar Chaudhary and Musical Artist Misty Bharadwaj aka B Misty were the other two judges.

After screening thousands of entries received from across the country, the jury members of HomeStars RapChik had initially shortlisted 15 Desi rap artists who took part and showcased their talents in the virtual Rap contest. A total of five episodes were webcasted during the course of the show highlighting various youth-oriented themes such as ‘money’, ‘depression’, ‘social media’, etc., and eliminations based on public voting were held after the completion of each episode.

In the 5th and final episode, i.e. the ‘Grand Finale’, the top 3 contestants battled against each other, giving hard-hitting, mind-boggling performances. Judges RCR and B Misty also joined in to present their own rap performances. During the second round of the finale, the viewers of the show were in for a pleasant surprise, as the 3 finalists of HomeStars RapChik teamed up with 3 top singers from HomeStars Season 1 (a virtual singing show conducted few months back by Flutin) to present ‘duet’ performances.

Speaking about the show, Mr. Vishu Gupta, Founder & CEO, Flutin says, “We are extremely delighted to see how this virtual rap competition shaped up and presented a wonderful platform to India’s finest underground rappers. The journey of HomeStars RapChik was indeed very exciting and fun-filled, and we were overwhelmed by the immense love and engagement from our audience. Although the contest has ended, we at Flutin remain committed to help budding artists of the country, and we are ready to go the extra mile in the future in supporting these promising musicians in every possible way. Also, Flutin is planning to organize more such virtual talent hunts across different performing arts’ categories in order to discover more talents and reward them.”

Mahaguru of the show, ‘Prince of Bhangra’ Mr. Sukhbir Singh adds, “The entire show was true to its name and was truly ‘Rapchik’ to the core. It was a treat to watch these young Indie rappers come up with some world-class rap performances. Thanks to HomeStars RapChik and Team Flutin, these deserving talents of the nation are getting the right opportunities to rise and shine.”

Rajiee M Shinde, Music & Infotainment Veteran says. " It was awe-inspiring to see some extremely talented, enigmatic and passionate rappers of our country pour their hearts out on HomeStars RapChik. The high-spirited musical journey of this virtual show got better and better with each episode, and was no less exciting than any traditional music competition. I sincerely hope that by creating more such shows and/or platforms in the future, we shall be able to catapult the Hip-Hop music scene in India"

Notably, Kunal — the ultimate winner of HomeStars RapChik show –- has not only secured a cash prize of Rs. 50k for himself, but also gets the big opportunity to professionally kick-start his rap music career in the form of a music video that will be produced and promoted by Flutin. Despite pursuing CA(Chartered Accountancy), Kunal decided to continue following his passion and heart’s desire for creating Rap music, and eventually Flutin’s platform made his dreams come true!

“It gives me goosebumps to have achieved this unbelievable feat. I feel awesome that I could win over my fears and also win the competition to become India's first-ever Rapchik Rapper. My mother is so happy now and my life has changed for the better. Thanks a lot Flutin and everyone who has voted for me,” said Kunal, after being named the winner of the show.

All episodes of ‘HomeStars RapChik’ were streamed live on Flutin’s website and social media channels, and the show has already crossed over 2.8 Million views and 350K watch hours as of date. To give maximum reach to the performances, the episodes were also broadcast to 25 million+ audience base on Facebook through its ‘Watch Party’ feature.

Unlike conventional reality shows or talents hunts on TV, Flutin through its flagship platform ‘HomeStars’ wants to create and roll-out a series of virtual talent shows, where true talents are handpicked, appreciated, rewarded, and nurtured for the long-term, and are also given various opportunities and platforms to help them realize their inner potential to the fullest.

Flutin app, launched originally as Pindrop Music in 2015, is a music streaming app that was developed to simplify and revolutionize the process of discovering new music online. The app was launched with the objective of promoting talented emerging artists while offering music listeners an endless pool of popular as well as lesser-known songs to stream.

Laced with exciting features such as mood-based music suggestions, one tap song dedicate, and simplified music discovery, Flutin has been loved by millions of users around the world. Since Flutin pledges to find, encourage and promote new talent, thousands of budding musicians have put their faith in the platform and succeeded in gaining worldwide fame.

Online assignment help by Copycrafter will free you from any academic issues
BuyEssaysCheap.com - affordable writing help
Go to Assignmentgeek.com and get your homework done.
Buy 100% high-quality replica watches with a 2-year warranty and free ground shipping!