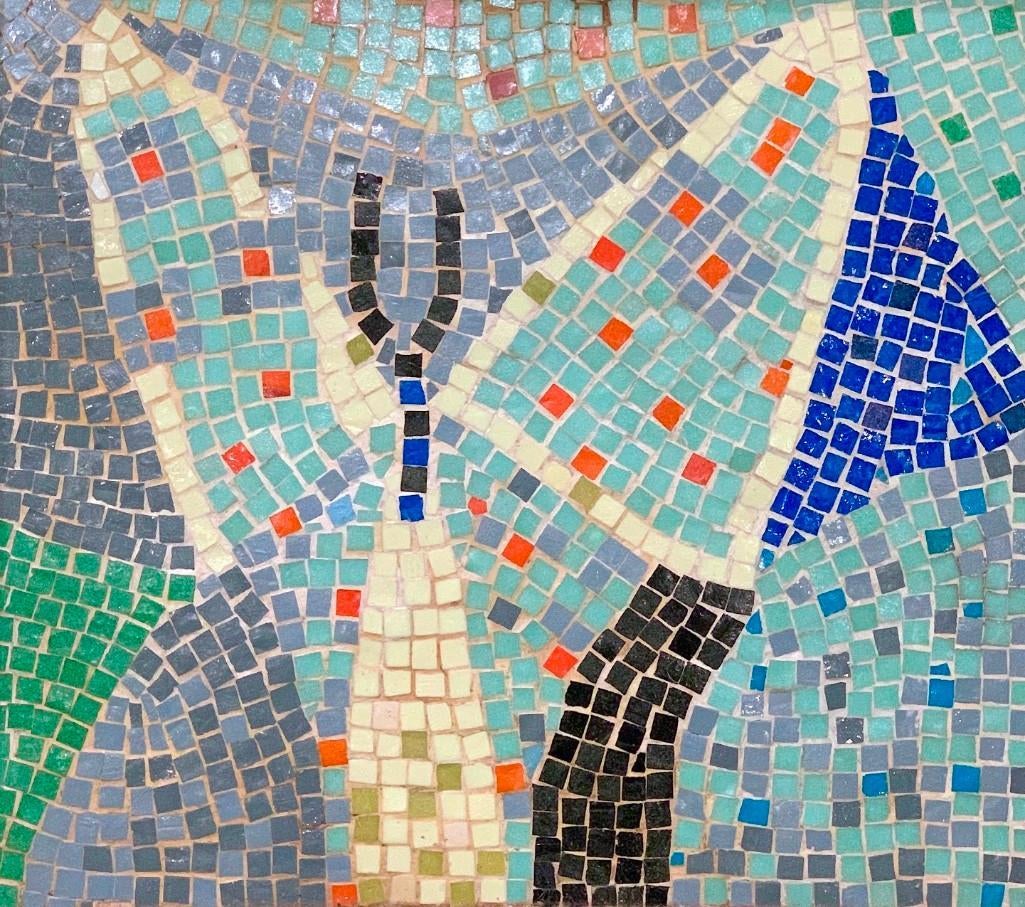 The auction featured traditional art and antiques, silver, jewelry, decorations and furnishings, pulled from prominent local estates and collections. Downsizing households presented some great opportunities for both new and established collectors. Internet bidding was provided by Liveauctioneers.com, Invaluable.com and Bidsquare.com. Phone and absentee bids were taken.

The mosaic tile by Roy Lichtenstein (American, 1923-1997) was executed by the artist in 1950 and was the sale’s top lot. Hand-set, unsigned and framed in walnut, the 14 ½ inch by 16 ¼ inch tile was not attached to a table base. It’s listed in Lichtenstein’s catalog raisonne and came out of a private collection in Cleveland, having been acquired by the consignor directly from the artist.

The early 20th century Roycroft Ali Baba bench featured a plank seat retaining bark to the underside and was presented on a trestle-style base joined by a mortise and tenon jointed stretcher. It had the Roycroft orb and cross on the leg. Roycroft was a reformist community of craft workers and artists that formed part of the Arts and Crafts movement in the United States.

The 17th century oil canvas laid on panel portrait of a Royal or Court Lady was unsigned and unframed, with a panel size of 27 inches by 22 inches. The painting had some in-painting to the face and lace ruff, plus some minor filling to craquelure, but that didn’t deter eager bidders who were dazzled by the sitter’s visage and the chance to own an antique artwork from the 1600s.

Following are additional highlights from the auction. Prices include a 23 percent buyer’s premium.

An oil on canvas Still Life with Crystal Globe and Flowers, rendered in 1925 by the Cleveland School artist Clara Deike (1881-1964), one of three works by the artist in the auction, finished at $2,460. Also, a lithograph by Missouri artist Thomas Hart Benton (1889-1975) titled Morning Train, a heart-wrenching image of a soldier heading off to war, artist signed, fetched $2,337.

Three works by the French painter Jules Cavailles (1901-1997) made up a colorful section of the sale in the form of happy still lifes. One, titled Still Life with Vase of Flowers and Mask on Table (1935), realized $2,214. Also, an oil on canvas depiction of Venice Canal with Gondola by the French artist Joseph Antoine Bouvard (1840-1920), signed lower right and framed, hit $3,198.

A circa 1880 Regina upright automatic disc box, 5 feet 7 inches tall, with 20 15 ½ inch discs, in fine playing condition and housed in a cabinet that had been beautifully restored and refinished, rose to $9,225. Also, a fine Tabriz carpet, 13 feet 2 inches by 10 feet, made from blended silk and wool on cotton weft in the Sheikh Safi design with a floral medallion, gaveled for $2,829.

An assembled Art Nouveau bedroom suite attributed to Eugene Vallin, including a bed frame, large armoire, side table and chair, carved with leaves, buds and tendrils, last sold at Sotheby’s in London in 1996, went for $9,225; while a circa 1880 English George III inlaid mahogany linen press, 81 ½ inches tall and raised on bracket feet, rectangular form in two parts, made $2,829.

Neue Auctions has three more auctions planned for the balance of 2020. The first will be a single-owner collection of lovely Art Deco pieces, titled Erte and Icart. After that is an auction titled Coach Me If You Can, a timed sale of over 100 lots of “new with tags” Coach bags and accessories. And finally, A Brave Neue World sale will be held in December (or in early 2021).

Neue Auctions invites everyone to be added to its email list to receive notifications and information regarding all current and future sales. For info, visit www.neueauctions.com.