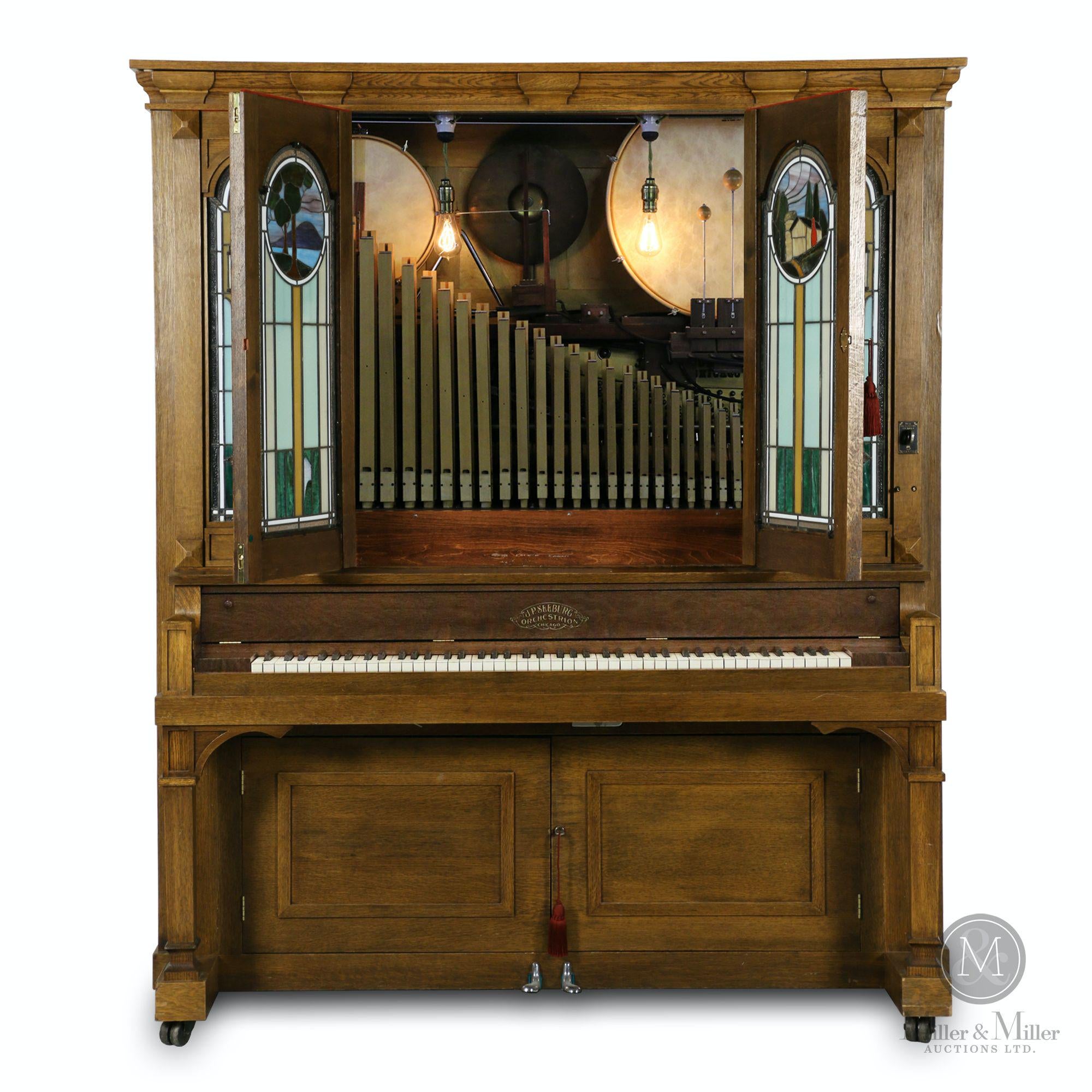 All prices quoted are in Canadian dollars and are inclusive of an 18 percent buyer’s premium.

The event – officially titled a Music Machines, Coin-Op & Advertising auction – was led by the outstanding lifetime collections of Ken Vinen and Jack Winkler and also featured general store items, petroliana (gas station collectibles), breweriana and automobilia. A total of 624 lots came up for bid – many of them with roots in Canada – in an auction that grossed more than $389,000.

The Seeburg “G” Orchestrion was a coin-operated masterpiece, outfitted with original and replica components. It had actually been professionally modified from a Seeburg style “A” but retained the correct torch mosaic leaded art glass doors. The machine – impressive at 66 inches tall by 79 inches wide – was from the Ken Vinen collection and include 13 “G” music rolls.

The 27-inch Orchestral Regina upright music box, with 29 discs, was another coin-op marvel. Like so many music machines from the era, it was originally rented as a coin-consuming investment to shrewd bar owners. Aside from a being a money-maker, it provided fun entertainment, a sure way to divert thirsty patrons from neighboring establishments.

The George Baker & Company cylinder music box, made in Switzerland in 1922, was a rare variant, featuring the sublime harmony of a drum with six bells. Originally built with five 8-tune cylinders, the machine was lovingly restored by Darren Wallace in 2017 and maintained by Ken Vinen until his death in 2019. Included were five 8-tune cylinders.

“Quality, fresh to the market collections are always well-received among our buyers,” said Ethan Miller of Miller & Miller Auctions, adding, “Ken Vinen’s music machines sold like hot cakes. Originality and functionality meant a lot to Ken and this was evident in the prices realized. The phone was ringing all week. Nobody wanted to miss this opportunity. It was a great auction.”

While the list of top lots was loaded with music machines, it was actually an eclectic sale, with items ranging from a Canadian Goold high-wheel bicycle from around 1890, the front wheel 54 inches in diameter to the handlebars (S3,245); to an American-made early 20th century Holcomb & Hoke Butter-Kist popcorn machine in a walnut case ($3,835); to an adorable 1940s Addison model A2 “Baby” Bakelite radio made in Canada ($4,425).

Following are additional highlights from the auction, which was online-only, with live video feed from location. Internet bidding was provided by LiveAuctioneers.com and the Miller & Miller website (www.MillerandMillerAuctions.com). The 422 users placed a total of 8,162 bids; 47 percent of lots met or exceeded estimates and 32 percent of lots surpassed the high estimate.

The name Wurlitzer was called multiple times during the auction. A few lots sold as follows:

- A Wurlitzer model 61 jukebox, circa 1939, coin-operated, with an unfinished stand. A multi-selector phonograph jukebox that includes a library of 78 rpm records ($3,540).

A rare, two-sided Ford porcelain hanging dealer sign, made for the Canadian market in the 1930s, untouched and original, 27 ½ inches by 18 inches, changed hands for $3,540; while an American two-sided porcelain neon sign for General Electric from the 1950s, sizable at 56 inches by 50 inches, marked “Kolux Corp., Kokomo, Indiana” lower right edge, hit $3,245.

Two music machines brought $3,540 each. One was a J.P. Seeburg model “L” Nickelodeon and remote coin box, American-made in the 1920s, in a quarter-sawn oak case with leaded glass panels. The other was a 1920s American Edison Opera phonograph, original and untouched, the cabinet retaining its original finish and hardware. Included in the lot were ten 4-minute cylinders.

To learn more about Miller & Miller Auctions and the firm’s slate of upcoming auctions, visit www.MillerandMillerAuctions.com.

Online assignment help by Copycrafter will free you from any academic issues
BuyEssaysCheap.com - affordable writing help
Go to Assignmentgeek.com and get your homework done.
There is no better press release writing company as 123 term papers.