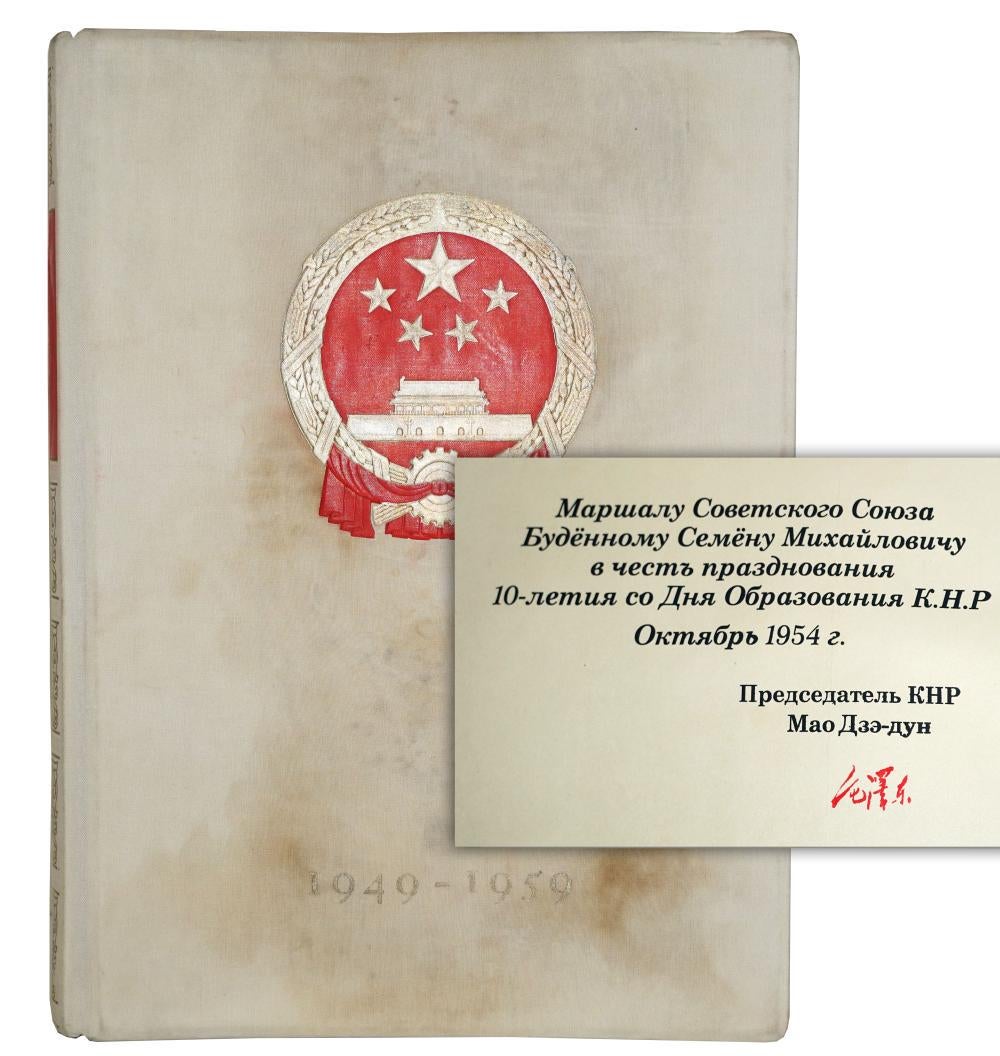 
Westport, CT, USA, September 15, 2020 -- A presentation copy of a Russian book celebrating the 10th anniversary of the People’s Republic of China signed by Chairman Mao Zedong (Tse-Tung); a receipt signed by Edgar Allan Poe, likely for payment of his famous poem “The Raven”; and a signed copy of Albert Einstein’s doctoral dissertation from 1905 are all part of University Archives’ next online auction slated for Wednesday, September 30th. The auction will begin at 10:30 am Eastern time.

The full catalog, showing all 356 lots, is up for bidding and viewing now, at the newly revamped University Archives website (www.UniversityArchives.com), as well as the online platforms LiveAuctioneers.com, Invaluable.com and Auctionzip.com. Phone and absentee bids will also be accepted. The sale contains rare and highly collectible items from multiple specialty categories.

These include literary (including Poe, Nathaniel Hawthorne and more items from the estate of Beat writer Jack Kerouac); presidential (to include items signed by Washington, Jefferson, Lincoln, Kennedy, both Roosevelts and others); and early American (to include Benjamin Franklin and some signers of the Declaration of Independence, always a hit with collectors).

Other categories include foreign (the Mao Zedong piece, plus the Cuban Revolution and other items), science (seven lots pertaining to Einstein, plus Charles Darwin, Sir Isaac Newton, Stephen Hawking and others), and space, a burgeoning category of collectibles (featuring Apollo IX, XI, XII, plus Neil Armstrong, Walter Schirra, Russian cosmonauts and Charles Lindbergh.)

The special presentation copy of a Russian book signed by Chairman Mao Zedong and dedicated to Marshal Semyon Budenny, a Soviet Civil War hero and deputy member of the Politburo, has an estimate of $200,000-$300,000. The 588-page book is wrapped in white silk binding, printed in Cyrillic and profusely illustrated. It celebrates the 10th anniversary of the founding of the People’s Republic of China in October 1959. An intense bidding war is anticipated for the book.

The receipt signed by Edgar Allan Poe (1809-1849), probably acknowledging payment for publication of his poem “The Raven”, dated in Poe’s hand (“April 16 / 45”), handsomely displayed alongside two portraits of Poe and framed behind glass, should bring $60,000-$70,000. Also sold will be Walt Whitman’s handwritten invitation to a Philadelphia guest and items signed by literary legends Henry Wadsworth Longfellow, Mark Twain, Arthur Conan Doyle and others.

The Science category is packed with historical documents, manuscripts, photos, and books from the greatest scientific minds of the last 400 years. The copy of Albert Einstein’s doctoral dissertation from 1905, signed by him and titled A New Determination of Molecular Dimensions, should hit $30,000-$40,000. The six other Einstein-related lots in the sale include the following:

- Three autographed letters signed, one of which features over 30 lines of tightly packed cursive and 12 lines of mathematical notations in Einstein’s hand (est. $24,000-$26,000).

About University Archives:
University Archives was founded in 1979, as a division of University Stamp Company, by John Reznikoff, who started collecting stamps and coins in 1968, while in the third grade. Industry-wide, Reznikoff is considered the leading authenticity expert for manuscripts and documents. He consults with law enforcement, dealers, auction houses and both major authentication companies. For more information about University Archives, please log on to www.universityarchives.com.
readmore: https://www.prpocket.com/2020/09/items-signed-by-mao-zedong-edgar-allan-poe-einstein-darwin-etc-are-in-university-archives-online-auction-sept-30.html