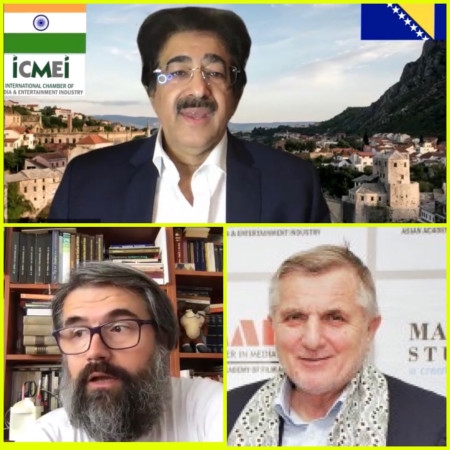 
New Delhi: A webinar was organized by ICMEI- International Media and Entertainment Industry in association with Indo Bosnia Film and Cultural Forum to highlight the Bilateral Trade and Cultural relations between the two countries. H. E. Muhamed Cengic Ambassador of Bosnia and Herzegovina to India was the Chief Guest.

“The Government of both the countries are in a very good relationship now. Our association with India was established in the year 1992; the embassy of Bosnia and Herzegovina opened in the year 1999 in New Delhi. The Diplomatic delegations from both the countries have been visiting to take the relationship to a newer height. Two major investments by Indian groups are in Steel and Chemicals. Agreement on Trade was signed in 2002 whereas Joint Business Council was signed in 2003. The total trade between the two countries has risen from 61.1 Million US $ to 86.2 in 2018,” informed H.E. Muhamed Cengic in his keynote address.

“one of my projects is complete but due to the pandemic I am unable to release the film. Large number of festivals planned this year including Sarajevo Film Festival, the Ballet Festival, the Music festival have to be postponed due to the present situation,” expressed Faruk Loncarevic a well known film maker from Bosnia jointly addressed the webinar.

Replying to queries Faruk said that he was an ardent fan of Indian films and Bollywood. He mentioned that Directors like Satyajeet Ray and Guru Dutt were remarkable; film like thee idiots has appealed to him and he asks his students to watch this film. He stressed on direct communication with India to further strengthen the ties between the two countries.

Buy 100% high-quality replica watches with a 2-year warranty and free ground shipping!
On-demand assignment help - find an assignment experts in 3 steps.
Online assignment help by Copycrafter will free you from any academic issues