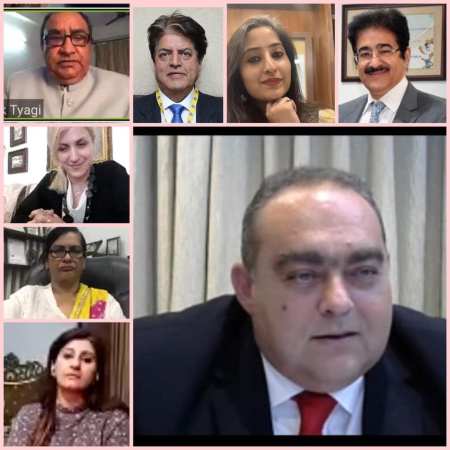 
A powerful webinar on Indo Romanian relations was hosted by ICMEI in association with the Indo Romania Film and Cultural Forum. H E Radu Octavian Dobre, Ambassador, Embassy of Romania in India was the honourable speaker who expressed his views on the subject. H E Dobre also spoke on the situation of the Corona 19 pandemic in his country and the developmental policies taken up by the Romanian Government during this testing time.

Mr. Dobre stated that the indo Romanian relations were established in the year 1948 which were upgraded to embassy level in 1955 with the opening of the Romanian embassy in India. Indian embassy came up in Bucharest in 1957. Romania imports electric machines, devices and equipment, common metals, chemicals and allied industrial products and many other commodities from India and exports common metals, sound and image displayers and recorders, chemicals and connected industrial products and many other commodities to India. Mr. Dobre also put forth the economical figures and the bilateral relations enjoyed by both the countries. He said that his country was also fighting against terrorism.

He said that both the countries were also very much close to each other culturally and over a thousand Indians are presently residing in India. During the interactive session Mr. Dobre spoke about the tourism of Romania which has already started with the hotels and beaches opening up in his country. A number of Indian films have also been shot in Romania and the people are huge fans of Indian film stars since the time of Raj Kapoor. He also expressed his views on the higher education in Romania. He stated that corona has been very much controlled in his country with less than 50,000 people getting affected with around 2000 deaths.

Dr. Sandeep Marwah President ICMEI also the Chairperson of Indo Romania Film and Cultural Forum thanked the Ambassador for accepting his invitation to attend the webinar while Mr. Ashok Tyagi, Secretary General ICMEI paid the formal vote of thanks.

Online assignment help by Copycrafter will free you from any academic issues
On-demand assignment help - find an assignment experts in 3 steps.
Go to Assignmentgeek.com and get your homework done.
There is no better press release writing company as 123 term papers.