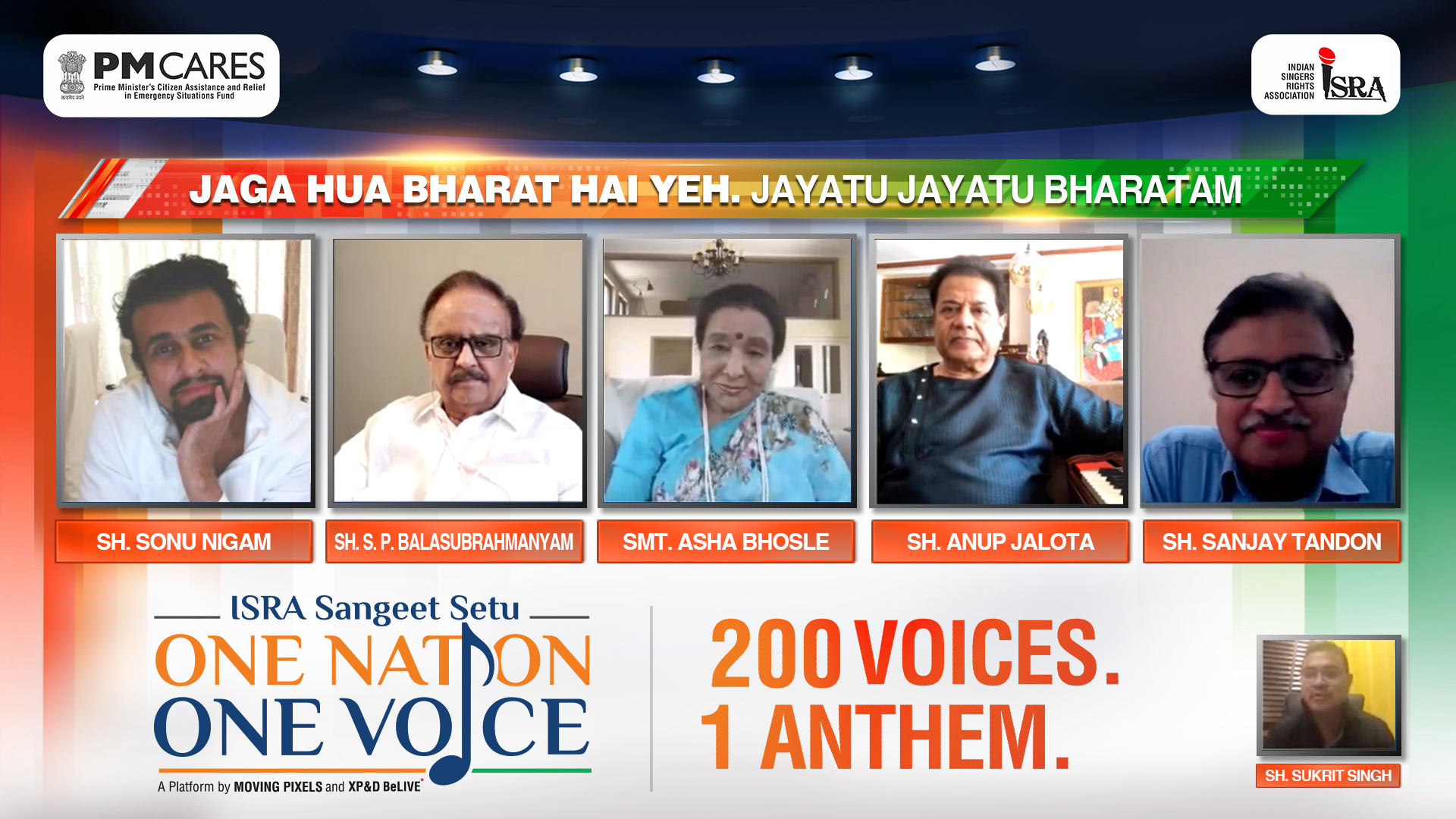 
India, 15th May 2020: Inspired by the clarion call of the Hon’ble Prime Minister Sh. Narendra Modi for a awakened  and resurgent India that conquers all challenges - 200+ singers from ISRA have come together to create the largest anthem platform ever - “Jayatu Jayatu Bharatam, Vasudev Kutumbakkam.”

Commenting on the initiative legendary singer Shri Asha Bhosle who is also leading this effort states “Jayatu Jayatu Bharatam-  the historic anthem in 14 languages is dedicated as a salutation to  each and every Indian who has stood together as a family in these difficult times. The time has now come to rise above all challenges and be a part of the new Jagaa Hua Bharat! - winning over one of the biggest crisis to humanity.”

Having held the 3 very popular Sangeet Setu virtual concerts which was viewed by over 20 Cr + people across the globe and having got over 75 Cr social media interactions, Chairman of ISRA, Shri Anup Jalota says “The song is set on a very positive note depicting India and its value of Vasudev Kutumbakkam at such times.”

Leading legendary Singer Shri S P Balasubrahmaniyam commented “Even in these difficult times, We salute every Indian who has shown so much of resilience. The nation is now emerging much stronger – the awakened India. We are sure that India will emerge stronger and this is our humble offering”

Singer Sonu Nigam said “As part of our duty and respect to our fans and citizens of our country, and on their popular demand, we now are offering the “ISRA One Nation One Voice – Jayatu Jayatu Bharatam” incorporating several different languages of the Country to match upto the vastness and diversity of India.”

What makes the anthem even more appealing is that every artist has recorded from home, during this lockdown. Mr. Sanjay Tandon, CEO of ISRA said, “On popular demand from fans of all Singers and to reflect the current situation of a strong India, we are now launching a historic Song Offering which has never been done before, 200+ Singers of the Country coming together for 1 song. This one of its kind anthem has been beautifully composed & written by ISRA members Shri Shankar Mahadevan and Shri Prasoon Joshi respectively”

The song will be released across over 100 platforms on 17th May -these include TV, Radio, Social Media, Digital streaming, OTT, ISP and DTH. “One Nation One voice - Jayatu Jayatu Bharatam, Vasudev Kutumbakkam”  not just an anthem it’s a National movement - we have over 100 broadcast, social, amplification and tech platforms supporting the launch” said Mr. Sukrit Singh of XP&D BeLive.