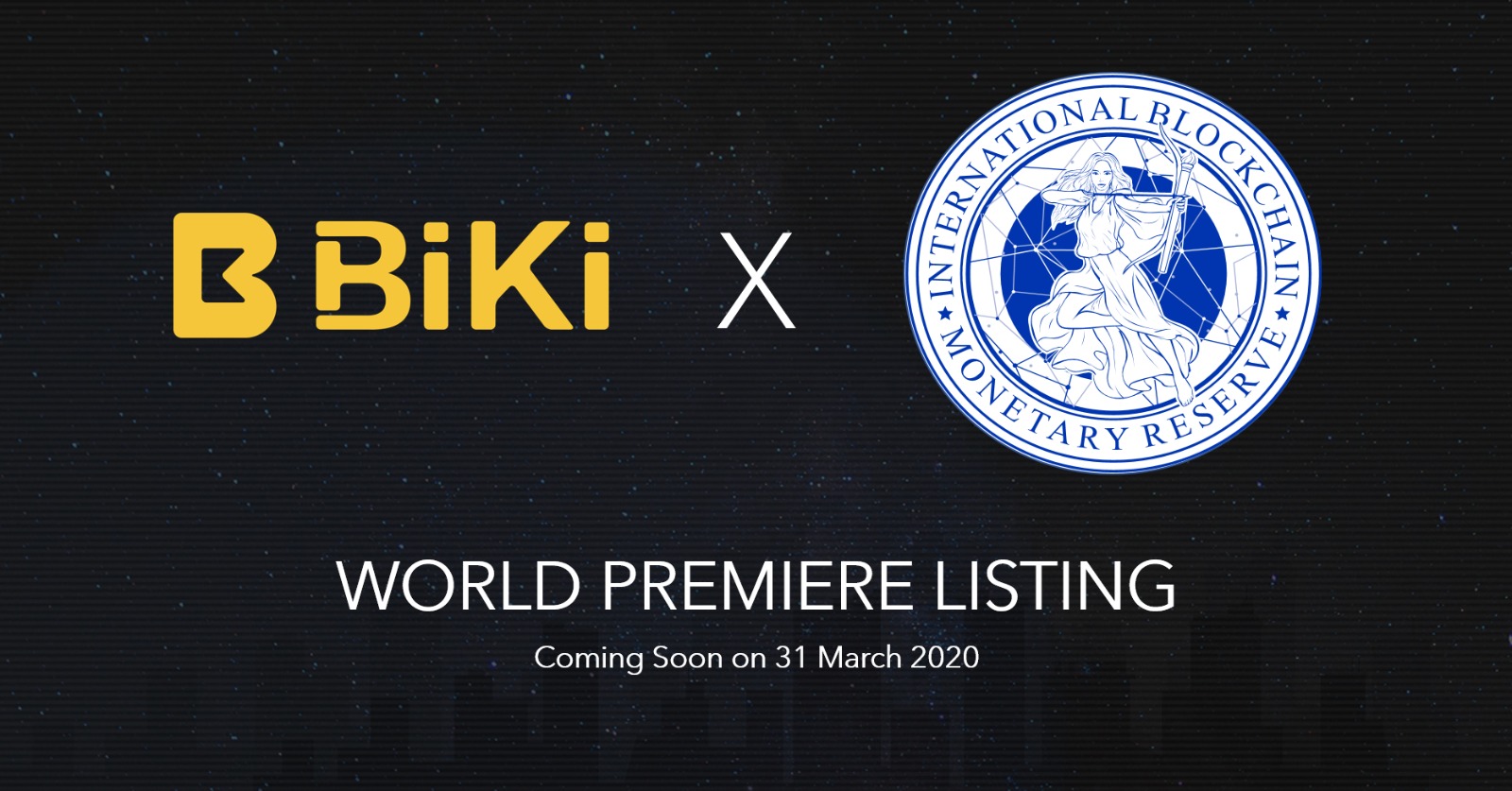 
Singapore, March 26, 2020 -- Top 20 CoinMarketCap Crypto Exchange BiKi.com is pleased to announce the world premiere listing of Asia Reserve Currency Coin (ARCC) on the BiKi platform. This coincides with the announcement that USD3.48 million has been raised by IBMR.io, an economic development reserve and advisory, in seed investments into the ARCC Currency Reserve. The seed round comes as a basket of cryptocurrencies that include ALGO, BTC and BNB, with the funding coming directly from Borderless Capital (formerly Algo Capital) and others.

Corresponding with ARCC’s Reserve funding, ARCC will be listed on BiKi Exchange on March 31st 2020. Platform users can look forward to exciting benefits and rewards from trading ARCC. In return BiKi will be providing promotional exposure for ARCC to a larger global market that includes top Asian regions like China, South Korea and Vietnam. With access to top crypto news sites like Jinse Finance, BiKi will implement continuous marketing and community building with key opinion leaders (KOLs) in these regions.

“We’re beyond thrilled to be the first exchange to list the Asia Reserve Currency Coin (ARCC),” ?said Ethan Ng, Southeast Asia CEO of BiKi.com. ?“We fully believe in its mission to drive financial empowerment to the urban working poor in Southeast and South Asia. Similar to BiKi’s belief in serving the community first, we admire ARCC ideals to serve the unbanked, bridging the gaps using blockchain technology. I truly respect Sinjin and his team for utilizing blockchain in a real-world use case, allowing those unfamiliar with blockchain and cryptocurrencies to understand its vast extent and benefits, thereby building more confidence in this area.”

IBMR.io recently announced the launch of its microfinance platform and dedicated token to promote financial inclusion in Southeast Asia. The injection of funding will help back the value of ARCC’s microasset token and ensure ARCC’s long-term viability as an accessible and distributed reserve currency for the region. ARCC provides the incentive for participation on the ARCC.one microfinance asset management platform and is issued as an Algorand Standard Asset, ASA, token.

“The mission of ARCC is to bring socio-economic transparency and financial stability to the urban working poor of Southeast Asia. We initiated and pushed this project knowing that the scope was a loonshot and would not get the support or validation from the speculative crypto market,” said ?Sinjin David Jung, founder and Managing Director at IBMR.io?. “But with the economic shutdown of the world due to the COVID-19 virus, nothing has justified our project more to push forward to empower and equip those who are seen as inconsequential collateral damage in this global crisis. ?We are extremely thankful for the support and backing from both Algorand and Borderless Capital to establish ARCC as the world’s first microasset.? We have taken the first step to establishing an accessible and distributed reserve currency for the urban working poor in emerging markets. Our listing on BiKi.com is the result of three years of dedicated planning and preparation and would have not been possible without the visionary support and recognition by our strategic partners Algorand Inc and Republic Crypto. Let’s do this and show what the promise of blockchain really means for creating a new economic reality for those excluded from this one.“

Initiated in May 2017, after three years, IBMR and ARCC are finally ushering in a new paradigm of microfinance and empowerment through the direct support of debt-free capital to the urban working poor.

"Republic is beyond excited to see ARCC listed on the Biki platform,” said Andrew Durgee, Managing Director Head of Blockchain at Republic. ?“Being partners with both organizations, we see this as the perfect match of exposure and drive. It's not often in this industry that such talent coalesces into one project but we are certainly seeing that with this launch. We will be keeping a close eye on this one as the sky is definitely the limit."

There is no better press release writing company as 123 term papers.
Online assignment help by Copycrafter will free you from any academic issues
On-demand assignment help - find an assignment experts in 3 steps.
Buy 100% high-quality replica watches with a 2-year warranty and free ground shipping!