The TOPPS Company Unveils ‘Project 2020,’ One Of The Most Eclectic Projects In Company History 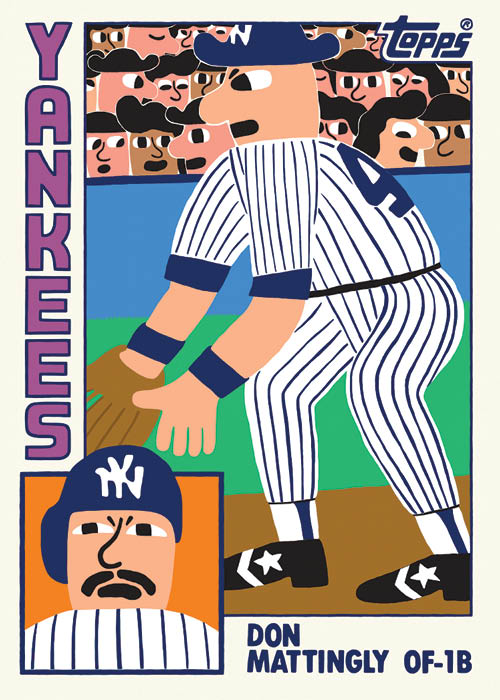 
The Topps Company and its fast-growing on-demand platform TOPPS NOW™ today announced one of the most unique, transformative and eclectic offerings in company history: “Project 2020,” a first of its kind effort that combines some of the most iconic cross-generational cards in the company’s nearly 70 year history with baseball, re-imagined by some of the world’s most influential, creative and eclectic artists, cartooners and pop culture influencers.
Some of the notable artists on the list include celebrity jewelry designer Ben Yang…aka Ben Baller; Chicago based designed Just Don, who has worked with Kanye West and Nike on major projects; Mexican American tattoo and graffiti artist Mark Machado, known as Mister Cartoon; Australian Tyson Beck, whose recent resign of the NBA logo in the image of Kobe Bryant became an international cause célèbre; New York native and design artist Sophia Chang and L.A. Based streetwear artist Joshua Vides.
The first two cards, issuing today, include Ben Baller’s Ichiro (2001) and Jacob Rochester’s Sandy Koufax (1955).
Each of the 20 artists will reinterpret 20 cards, representing baseball’s greatest stars from the 1950s to the present day. The cards will only be available for a 48-hour period from the time each is introduced.
“When we think of the collectible world and where it has evolved today, sports and pop culture continue to collide,” said Jeff Heckman, Global Director of Ecommerce. “We could not think of a better way to expose trading cards to a new audience than working to reinvent some of the classic baseball cards and personalities of the game of baseball through the eyes and hands of many of the world’s greatest pop culture figures of today. ‘Project 2020’ will be a must have for core and casual baseball fans, and will more importantly showcase the names and stories of the artists and the players on the cards to a global audience whose interests lie well beyond the sport. It is a transformative move we are very excited about.”
“Roberto Clemente and his story have always been inspirational to me,” said Mister Cartoon, whose hometown high school mascot was the Pirates, adding to his longtime connection to the Pittsburgh slugger and made working on the Clemente card extra special. “I want to take each of these classic cards and supercharge them!”
The cards in the Project 2020 offering include: 1952 Willie Mays; 1952 Jackie Robinson; 1955 Sandy Koufax; 1959 Bob Gibson; 1980 Rickey Henderson; 1989 Ken Griffey Jr; 1969 Nolan Ryan; 1984 Don Mattingly; 2001 Ichiro; 1992 Bowman Mariano Rivera; 1982 Topps Traded Cal Ripken; 1983 Tony Gwynn; 1975 George Brett; 2011 Updates Mike Trout; 1987 Mark McGwire; 1990 Frank Thomas; 1985 Dwight Gooden; 1955 Roberto Clemente and 1954 Ted Williams.