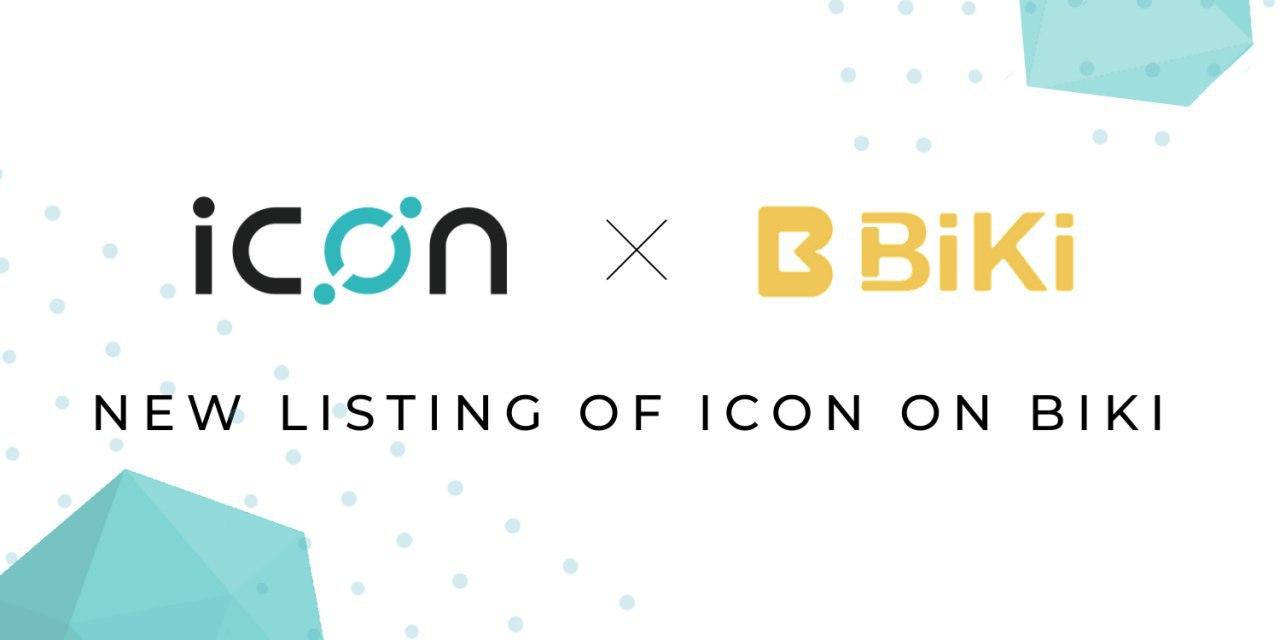 
Singapore, March 25, 2020 -- Digital assets trading firm BiKi.com is pleased to announce its listing of ICON (ICX), a Top 40 CoinMarketCap project from Korea that boasts one of the largest communities in the entire blockchain space.

This newly formed partnership with BiKi Exchange will see ICON expanding its reach outside of Korean markets and growing their exposure in Chinese markets, amongst other Asian markets.

On the partnership with BiKi Exchange, Mr. Min Kim, Co-founder of ICON states, “BiKi is a leading exchange in a very important market and we’re very excited to partner with them as we expand our growing ecosystem. We look forward to collaborating significantly as we increase our reach globally and as BiKi expands into Korea.”

“We are equally excited to be partnering with ICON,” chimes in Ethan Ng, Southeast Asia CEO of BiKi.com, “and look forward to growing both our businesses in new and existing markets.”

Launched in 2017, ICON Project is a 3rd generation layer one DPoS smart contract platform, focused on interoperability and on-chain governance. The network is governed by over 110 nodes spread across over 35 different countries. ICON’s unique ‘Delegated Proof of Contribution’ design is driven by its novel IISS (ICON Incentive Scoring System), which rewards contribution and incentivizes growth. This has propelled ICON to world recognition and has set the benchmark in the industry.

The ICON ecosystem boasts governments, multinational corporations and startups, including some of the most used D’Apps across the industry. ICON powers decentralized ID products such as Broof and VisitMe, as well as functioning DAOs such as ICONbet and ICON Vote. Other decentralized blockchain communities which are part of the ICON network include STAYGE, a K-Pop global fan community and SOMESING, the world’s first karaoke service on the blockchain.

Loopchain, the core blockchain engine powering ICON is developed by ICONLOOP, one of the leading enterprise blockchain solutions in Korea. It is considered the standard blockchain platform for the Seoul Metro Government and powers MyID, the leading decentralized identity (DID) consortium in Korea. This consists of an alliance of over 50 companies and organizations including Samsung Electronics and Shinhan Bank. ICON has quickly become the most sought-after project in South Korea for mass adoption.

ICX is a governance and utility token used to power the ICON Network. As a 3rd generation DPoS network, ICON features increase scalability and throughput (compared to other layer one smart contract platforms) and it runs on the same core technology powering many enterprise and government services.

What makes ICX different and stand out among their competitors are several features. One of them is their on-chain governance, driven by proposals from a network of validators in the ICON community.

Another is their Contribution Proposal Fund to incentivize growth and contribution, this is operated as a decentralized autonomous grant system, funded through network resources.

Lastly, the IISS design is unique, providing voters and representatives with attractive rewards for their contribution. Currently, the staking reward for voters is 17% per annum with a real yield of 9%. This is the highest amongst peers in the market.

ICON will be launching LFT 2.0 in the coming weeks, a next-generation Byzantine Fault Tolerant (BFT) consensus algorithm that improves upon the existing Loop Fault Tolerance (LFT) algorithm. LFT 2.0 can achieve high performance and improve latency and TPS (transactions per second). Stay tuned on ICON’s channels for more announcements to come.

As BiKi.com onboards yet another premium project on its platform, its community-driven initiatives will no doubt continue to garner the loyalty and support of its platform users as well as community members.

About BiKi.com:
Headquartered in Singapore, BiKi.com is a global cryptocurrency exchange ranked Top 20 on CoinMarketCap. BiKi.com provides a digital assets platform for trading more than 150 cryptocurrencies and 280 trading pairs. BiKi.com is focused on providing the safest, most stable and most effective cryptocurrency trading platform. 100% of the transaction fees are used in buyback and burning of platform token, BIKI. Since its official opening in August 2018, BiKi.com is considered one of the fastest-growing cryptocurrency exchanges in the world with an accumulated 2 million registered users, 200,000 daily active users, over 2,000 community partners and 200,000 community members. BiKi.com has received investments from Huobi co-founder Du Jun, Genesis Capital Zhu Huai Yang, FBG Capital, ChainUP and others totaling approximately 10 million USD.