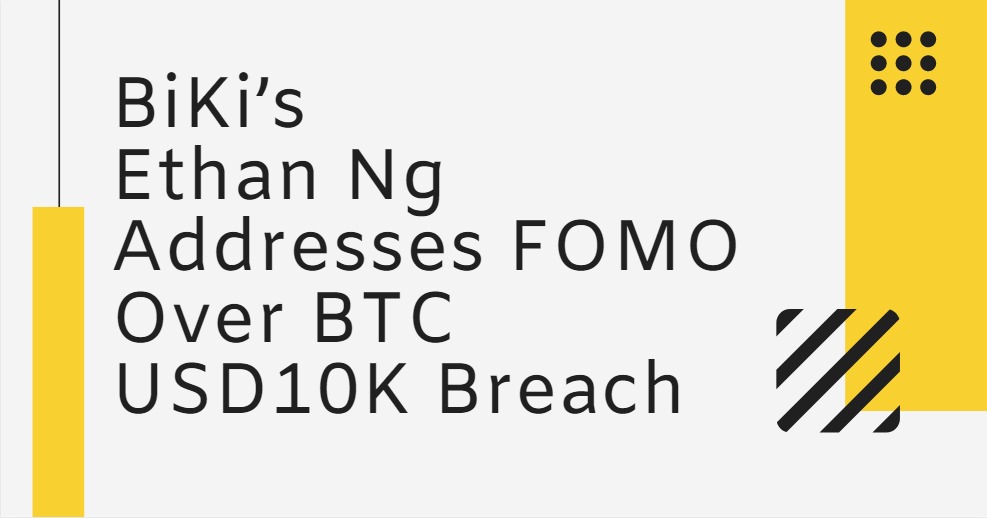 
Singapore, Feb 13, 2020 -- ‘Is the crypto winter over’ has been a common discussion topic amongst cryptocurrency traders over the past couple of years, as the markets have remained generally bearish in sentiment. The weekend’s BTC breach of USD10K, then the flash-crash to USD9.7K on Monday, with the subsequent rally to five figures again, has had the entire crypto market on its toes.

Reaching out to Ethan Ng, Southeast Asia CEO of BiKi.com, one of the fastest-growing cryptocurrency exchanges that is currently Top 20 on CoinMarketCap, Ng offers his insights.

Indeed fear of missing out (FOMO) is a common market inclination. The key, Ethan Ng stresses, is to have a healthy overview of the market conditions on a macroeconomic level.

“Amidst the lack of regulations in the past, BTC demand drove the market prices, to a point where breaking the barrier became very difficult,” says Ng. “However, currently, with increased mainstream adoption and regulation, there are other forces driving the price. As a consequence of that, demand is likely to soar faster, affecting prices positively. Mainstream users may not be interested in blockchain, but they may follow the money.”

Touted by ardent supporters like Max Keiser and others to potentially be the world’s reserve currency, Bitcoin has continually proven its resilience, the new public mainstream acceptance will present it to be an even more attractive investment option to hodlers and new-to-crypto traders.

Projects and D’Apps Will Benefit

Speaking on the impact this would have for projects and D’Apps developing on other chains, Ethan Ng notes that their reserves, if they held a portion in cryptocurrency, would appreciate in fiat value. This means that instead of focusing on fund raising, these projects and D’Apps would then have the space and manpower to develop and innovate in technology, providing real value to the blockchain ecosystem.

Based on the Gartner Hype Cycle for blockchain technology, we have passed the stage of inflated expectations, reached the trough of disillusionment and are now on the plateau of productivity. While this implies that there would not be sharp peaks in BTC price, there would likely be a corresponding cryptocurrency price plateau that is increasing.

“So the question isn’t when is the bull run,” suggests BiKi CEO Ethan Ng. ”We are already at a turning point for the bull run, just not a sudden shift to green in the market like the last time.”

While Ethan Ng does not discount influencers or experts who predict the BTC price will hit 6 digits within the next couple of years, he advocates that under the present circumstances, “the BTC investment trend could be changing and move from being a highly speculative investment to one that is backed by strong technology, governmental regulations and political as well as social acceptance, thereby lowering its volatility.”

As more governments get on the bandwagon with CBDCs, more users from developing countries will see value in cryptocurrencies, which is less unstable than their national currencies.

Jun Du, Founder of Node Capital and Co-CEO of BiKi.com, has a more bullish outlook.

“In addition, many countries, following China’s lead, have included blockchain technology into national science and technology plans, which will accelerate the development of blockchain, resulting in more applications of the technology,” he adds. “In the future, in 2025, blockchain will completely change the fundamental infrastructures and technological layout of the world and this applies to all aspects of people’s lives.”

About BiKi.com:
Headquartered in Singapore, BiKi.com is a global cryptocurrency exchange ranked Top 20 on CoinMarketCap. BiKi.com provides a digital assets platform for trading more than 150 cryptocurrencies and 280 trading pairs. BiKi.com is focused on providing the safest, most stable and most effective cryptocurrency trading platform. 100% of the transaction fees are used in buyback and burning of platform token, BIKI. Since its official opening in August 2018, BiKi.com is considered one of the fastest-growing cryptocurrency exchanges in the world with an accumulated 2 million registered users, 130,000 daily active users, over 2,000 community partners and 200,000 community members. BiKi.com has received investments from Huobi co-founder Du Jun, Genesis Capital Zhu Huai Yang, FBG Capital, ChainUP and others totaling approximately 10 million USD.