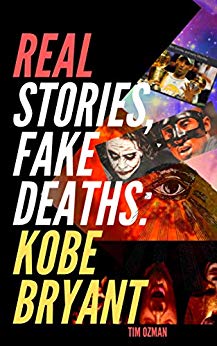 
Conspiracy theories have already emerged related to Kobe Bryant's death. Author Tim Ozman wants to share one of the emerging speculations that seize the world's attention.

The tragic death of Kobe Bryant basketball player some time ago has caused deep grief to his fans.

The cause of death has been confirmed that the helicopter crashed and killed nine lives, including him. Conspiracy theories have already emerged related to his death. Author Tim Ozman wants to share one of the emerging speculations which are trusted by QAnon, Illuminati, and Flat Earth adherents.

Real Stories, Fake Deaths: Kobe Bryant is the latest book of Tim Ozman, the author and editor in chief of the Flat Earth Report. This book shows the quality of Tim Ozman as a superior conspiracy theorist and reliable science fiction book writer. The plot "The Real Stories, Fake Deaths: Kobe Bryant" begins when Marcus Goldstein, a freelance journalist, and photographer at the online tabloid news, received a tip from the insider of the area where Kobe Bryant's helicopter crashed. The trouble began when the tip preceded the explosion by about 33 seconds. This leads him to question, was there anybody in that helicopter when it crashed, and he fell into conspiracy theory, whether the story of Kobe Bryant's death is true or not. So, what is the real story? He gets the story of a lifetime, nobody knows about it, but placing the truth ahead of sanity has its price, and it may take him to the gate of Hell itself.

Tim Ozman's book "Real Stories, Fake Deaths: Kobe Bryant" has 33 pages and can be purchased on

Tim Ozman is a book author and the host of Infinite Plane Radio, “Real Stories, Fake Deaths: Kobe Bryant” is his latest book. He has written several book onAmazon, such as The Power of ME: Mandela Effect Magick, God is a Narcissist, Jesus is a Codependent,, Deep Faked, How to Control Codependent People, The Flat Earthers: Life On The Edge of Reality, The Autohoaxer Handbook, Guardrails, and Secret Religion of the Elite. For more information about Tim Ozman, please visit http://infiniteplanesociety.com/.

BuyEssaysCheap.com - affordable writing help
On-demand assignment help - find an assignment experts in 3 steps.
Online assignment help by Copycrafter will free you from any academic issues
There is no better press release writing company as 123 term papers.