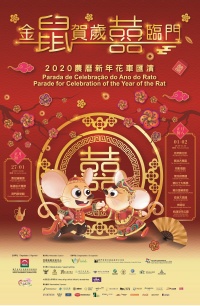 
Mumbai, 16th January 2019: Macao Government Tourism Office (MGTO) will present the mega celebration event — “Parade for Celebration of the Year of the Rat” at the central and northern districts on the 3rd day (27 January) and 8th day (1 February) of Lunar New Year respectively to celebrate the joyful occasion with residents and visitors. The event features a range of spectacular activities including float parade, mega performances, fireworks display, float exhibition, Favourite Parade Float Voting and more.

The “Parade for Celebration of the Year of the Rat” (the “Parade”) is organized by MGTO and co-organized by Municipal Affairs Bureau, Cultural Affairs Bureau and Sports Bureau, as well as sponsored by Asia Tourism Exchange Center. A press conference for the event was held today (8 January) to unveil the event program. MGTO Acting Director Cheng Wai Tong and Deputy Director Ricky Hoi, Assistant Director of Asia Tourism Exchange Center, Li Wen Pei, Vice President of Cultural Affairs Bureau, Chan Kai Chon, Head of Department of Civic Affairs and Consultation of Municipal Affairs Bureau, Patsy Ko Pui San, and Head of Sports Facilities Management Department of Sports Bureau, Ho Wa, were present in the press conference together with representatives of the supporting and sponsoring entities.

For the upcoming Chinese New Year, MGTO has tailored an array of celebrations for residents and visitors. With both the double first solar terms and an intercalary month falling on the Geng-Zi Year of the Rat, 2020 is considered a blissful year for tying the knot. As a major highlight during Chinese New Year, the “Parade for Celebration of the Year of the Rat” will be themed around a story of the Rats’ splendid wedding. Delivering the story through a confluence of aerial dance and acrobatics, the Parade will be unveiled on the third night of Chinese New Year to extend blissful wishes for spectators. Performance teams from near and afar will also perform at major tourist attractions during Chinese New Year for a close encounter with residents and visitors.

In speaking at the press conference, MGTO Acting Director Cheng Wai Tong stated that Macao boasts a year-round calendar of diverse and spectacular events and festivals, which not only manifests the harmonious flourishment of diverse cultures in the city but also offers great opportunities for residents and visitors to create wonderful memories with their dearest ones. He hopes that this annual event which carries on traditional Chinese culture can let everyone experience a rich ambience of Spring Festival in Macao.

The first round of the Parade will feature a range of elements including aerial acrobatics, float parade, procession of performance groups and fireworks display. At 8 p.m. on the 3rd day of Lunar New Year, an aerial acrobatics show will lift the curtain on the Parade. Joined by a total of 34 local and international performance groups, 18 dazzling auspicious floats will then set off from Sai Van Lake Square before Macau Tower, march along Avenida Dr. Sun Yat-Sen on Macao Peninsula until the destination at Macao Science Center. Starting from 5:30 p.m., warm-up performances will take place at intervals, featuring artists from Macao and Hong Kong including Selena Lee, Paisley Hu and Mandy Wong, among others. A 15-minute fireworks display will take place above the sea area overlooked by Macau Tower at 9:45 p.m.

For the convenience of residents and visitors, MGTO will operate free shuttle bus service around multiple routes between event locations and various districts in Macao Peninsula, Taipa and Coloane. Starting from 8 p.m. on the night, MGTO will live broadcast the Parade on LED screens set up at multiple locations in the city. In addition, TDM and Macao Cable TV will live broadcast the Parade on the 3rd day of Lunar New Year.

There will be another float parade and finale show of cultural performances on the 8th day of Lunar New Year. At 8 p.m., 18 floats will set off from Rua Norte do Patane to march along Avenida do Conselheiro Borja, Estrada do Arco, Estrada da Areia Preta, Avenida de Venceslau de Morais, Rua Quatro do Bairro da Areia Preta, Avenida da Longevidade, Rua do Mercado de Iao Hon until the finishing point at Iao Hon Market Garden, where artists from Macao and Hong Kong including Louis Yuen, Germano Guilherme, Elise Lei, Elvin Chio, BoBo Chan and Kenny Lei will dazzle the finale show among others.

Vote for your favourite float to win attractive prizes

By scanning QR codes on the floats, residents and visitors can access the voting platform for the activity “Favourite Parade Float Voting”, vote for their favorite floats and submit their personal information, to enter the grand lucky draw for chances to win attractive prizes including air tickets, hotel accommodation, ferry tickets, Smart TVs and smartphones, etc.

A close encounter with beautiful floats for abundant blessings

Online assignment help by Copycrafter will free you from any academic issues
Go to Assignmentgeek.com and get your homework done.
On-demand assignment help - find an assignment experts in 3 steps.
Buy 100% high-quality replica watches with a 2-year warranty and free ground shipping!