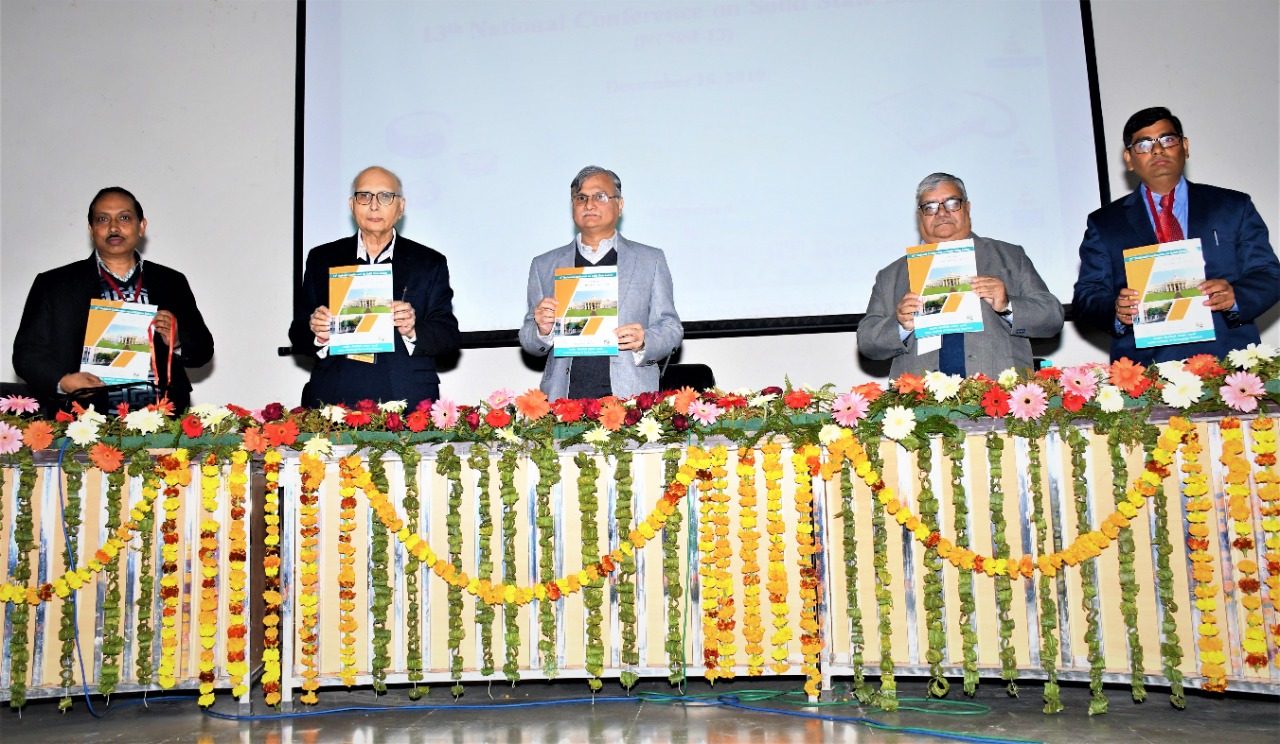 One of the massive challenges of the 21st century is the development of efficient and sustainable means of energy conversion, distribution, and storage. Solid State Ionics (the study of ionic-electronic mixed conductor and fully ionic conductors) based devices are playing a key role in such challenging scenarios, especially for transportation and bulk electricity generation which provides an alternative solution to pollutions, greenhouse effect, and dependency on oil-producing countries.

IIT Roorkee provided a platform for all stakeholders to address the above-mentioned issues by organizing a conference during 16-18 December 2019. Being a convener of this event, Prof. Yogesh Sharma was glad to inform that ~150 participants including 40 experts from IITs, IISc, NITs, IISERs, Universities, and Industries shared their knowledge’s, expertise, experiences with participants as an informative and collaborative event that brought an in-depth focus on the opportunities and markets available in India.

Further, this conference is engaged utility industry leaders, best academicians, scientists from the various organization to discuss the policies and best practices that are bringing energy conversion and storage to the forefront of conversations around the future of the grid, renewable deployment, and battery-operated electric vehicles, in particular.

Prof. A. K. Shukla, Honorary Professor, IISc Bangalore and Former director of CSIR-Central Electrochemical Research Institute, Karaikudi, India was the guest of honor at the event. At the event, he said “Such conferences are imperative to point various industries such as automobile and electricity department towards dynamic solutions that shall help in the generation of bulk electricity in a sustainable manner. I personally laud IIT Roorkee for stepping up and taking a lead in the department of Solid State Ionics and it is a pleasure to be here amongst you all.’

Prof. Shukla, being a pioneer battery expert in India who has also transferred several battery technologies to Industry, delivered a Plenary Lecture on “Batteries for A Sustainable World”

Recently Solid State Ionics appears more fascinating and flourishing since its foundation by Michael Faraday, Walther Nernst (Nobel prize, 1920) Carl Wagner and Wilhelm Ostwald (Nobel Prize, 1909). The reason behind this gigantic attention is due to the exponentially increasing demand for Solid State Ionic Devices such as high-performance batteries, fuel cells, chemical sensors, photo-galvanic solar cells. Recently, the Nobel Prize in Chemistry was given to John Goodenough, Stanley Whittingham and Akira Yoshino for the development of lithium-ion batteries (LIBs). These days, LIBs are being projected to get utilized more and more in electric vehicles. But the integration of present lithium-based batteries with electric vehicles is risky due to its nature of getting heated up during fast charging which leads to the explosion of the battery. Further, LIBs are expensive and need further improvement in overall performance indicators such as energy, power, durability, and weight. The most alarming situation in the Indian context is the non-availability of adequate raw materials in India to produce high-performance LIBs.

Director IIT Roorkee also addresses the gathering and stressed upon the need for adequate energy storage devices to support the electric mobility program and clean India movement of the Government of India. At the event, he said “I am delighted that the society of Solid State Ionics selected IIT Roorkee for hosting its 13th National Conference on Solid State Ionics and congratulate the team to bring out the best speakers including some the best leaders of the country such as Prof. Shukla. People from different disciplines of knowledge are participating in the conference which shows the relevance of Ionics and its need.’

Furthermore, it was discussed at the event that in order to support the socio-economic development of the Nation by inventing new storage technologies, Energy Storage Laboratory, Department of Physics, IIT Roorkee under the leadership of Prof. Yogesh Sharma is carrying out the cross-cutting research and technologies of LIBS, beyond Li-based batteries, ultracapacitors. With the support of IITR and DST, an art-of-state facility of battery manufacturing to produce pouch cell of capacity ~ 2200 mAh, and battery failure analysis by in-situ X-ray diffractometer. Prof. Sharma was glad to inform that these are unique facilities of its kind in any Institute of North India and this facility can be extended to support nearby industries and academic institutions.