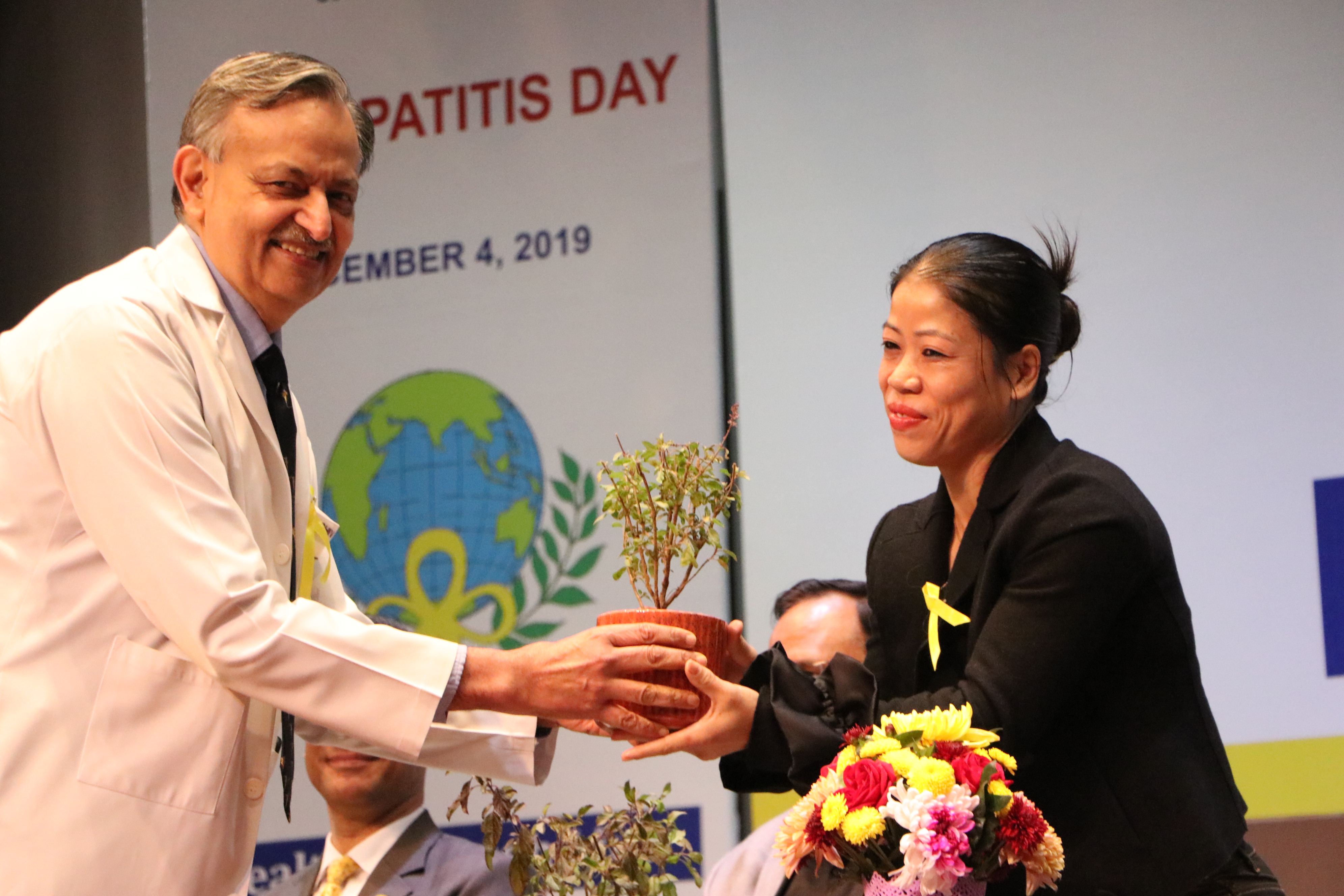 
New Delhi: 4th of December is recognised as Hepatitis Day by the state of Delhi, to increase awareness and understanding of viral hepatitis and the disease that it causes. Sh. Satyendra Kumar Jain, Hon’ble Minister of Health, Delhi inaugurated the 22nd Hepatitis day at the Institute of Liver and Biliary Sciences, in the august presence of Indian Olympic Boxer MC Mary Kom. Sh. Sanjeev Khirwar, Pr Secretary (H&FW), Sh. Vijay Kumar, Chief Secretary, GNCTD and Dr. Shiv Kumar Sarin, Director, ILBS were amongst the dignitaries present on the occasion.

The day marks the 22nd year of the Yellow Ribbon Campaign launched in 1998 by Dr, Shiv Kumar Sarin, a symbolic gesture to support the cause- fight against viral hepatitis. This hepatitis day, the city has come together with a unifying call of “Health Through Liver”.

Sh. Satyendra Kumar Jain, Hon’ble Health Minister of Delhi inaugurated an art exhibition displaying cartoons made by artists of over 40 countries to humorously depicts the plight of the liver in the body. Affirming his support for the cause, he said, “I was very impressed by the efforts of ILBS in organizing this event.” He said that people keep looking after organs like heart, brain etc but no one looks after their liver. He stressed that all diseases ultimately are caused due to a bad liver and if people keep the liver healthy then they will be able to escape most other diseases. The minister also launched the educational short videos made by ILBS for hepatitis awareness.

MC Mary Kom, the Indian Olympic Boxer and the Brand Ambassador of ILBS’ ‘Empathy Campaign’ interacted with the school students to educate them about the viral hepatitis. She shared her wisdom with the students in a bid to inspire them to join the cause and pledge against the menace of viral hepatitis. She also felicitated and motivated the hepatitis fighters.

On this occasion the institute also organized a free liver testing and vaccination camp, a Cartoon Exhibition titled “No Time For Liver” where more than 700 artists from around the world have participated, a poster display of activities conducted by students of government schools under the HEPI Schools Project. Another poster exhibition displaying posters made by school children on liver health was also held.

Viral hepatitis is an inflammation of the liver caused by a group of infectious viruses (Hepatitis A, B, C, D and E viruses). Each year, 1.34 million die globally and the 325 million people living with the disease could eventually experience liver disease, cirrhosis or liver cancer, if left untreated. In 2016, during the 69th World Health Assembly at Geneva, 194 countries committed to eliminating viral hepatitis (B and C) by 2030 at the World Health Assembly, signalling global action to rid the world of these diseases.

Dr. S K. Sarin emphasised on the importance of screening of Hepatitis B & C and encouraged the students and the guests present to extend their support towards the yellow ribbon campaign. He said, “Everyone must pledge support to keep their own liver healthy and also those of their families and friends.” He thanked the dignitaries for their support to the cause and expressed gratefulness that the Delhi government had been very supportive of the activities of the institute.

About 4% of Indians are afflicted with Hepatitis B and 1% with Hepatitis C. Put together, about 60 millions of us could be having Hepatitis B or C or both! While new drugs are now available with which Hepatitis C can be treated and cured, Hepatitis B can only be prevented through vaccination. Unfortunately, India does not have a national program against viral hepatitis yet.

ILBS is actively working towards eliminating viral hepatitis and has launched various awareness campaigns. One such campaign is Empathy Campaign: Empowering People Against Hepatitis B & C conceptualised by Hepatologist, Dr. Shiv Sarin, Director, ILBS and supported by Airports Authority of India. The campaign aims to generate community dialogue about viral hepatitis and encourage people to extend their active support to the people who are affected by addressing the stigma associated with Hepatitis B & C.

About Institute of Liver and Biliary Sciences

The Institute of Liver and Biliary Sciences is an Autonomous Super-speciality, Medical-cum-Research Institute for treatment of Liver and Biliary diseases under Government of NCT of Delhi. Since inception, the Institute has been making sincere endeavor to attain the bench mark of the best available quality parameters towards delivery of advance healthcare in the public domain at affordable costs.