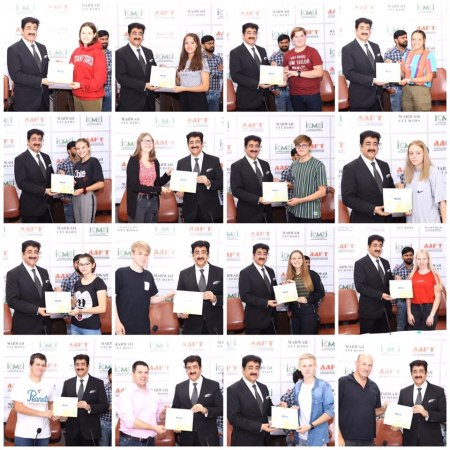 
Noida: Indo Germany Film And Cultural Forum invited 19 students to visit Noida Film City to see for them as how Indian film and television industry is organized.

“This is for the first time we have come to India, but we are lucky to be part of Bollywood without much efforts. We want to thank lotus valley school where we are stationed under students exchange program,” said one of the students while talking to Radio Noida 107.4 FM.

Another 19 Indian students accompanied the German students from High Secondary School and all were given workshop at Radio Noida. They were also part of MSTV program.

Talking to the students President Sandeep Marwah briefed the students the history of Noida Film City and achievements of Marwah Studios. He also informed them about the different courses running under AAFT University.

Later Sandeep Marwah presented certificate of participation to every student after the visit to the studios and workshop at Radio Station.

BuyEssaysCheap.com - affordable writing help
There is no better press release writing company as 123 term papers.
Go to Assignmentgeek.com and get your homework done.
Online assignment help by Copycrafter will free you from any academic issues