Convocation of 104th Batch of AAFT at Marwah Studios 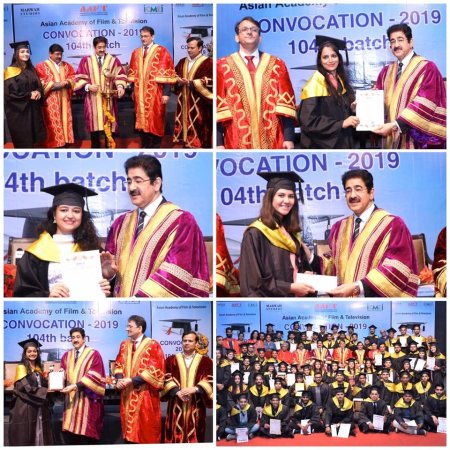 
Noida: Asian Academy of Film And Television bid farewell to the trainees of 104th batch at Marwah Studios, Noida Film City with great pomp and show.

“Enough has been taught to you, an education of almost 400 hours to three months students and 1500 hours of education to One year students is a record in itself. The production of almost 100 films in a year has made students full familiar with the industry norms, tricks and systems,” said Yogesh Mishra Dean AAFT.

A nine page report was read by the Amir Abdullah Director AAFT of all that what has happened in last three months including awards, placements, visits, workshops, international interactions, festivals etc.

“It has taken us twenty six years to built a reputation of this institution. Now it is entirely upto you how you can take best use of this goodwill. There is no alternate to hard work. You can change your destiny with continuous efforts and persuasion. Live for your self and spare some time for others you will grow much faster. Must carry the feeling to serve the nation then only you can have better tomorrow,” said Dr. Sandeep Marwah Chancellor of AAFT in his convocation address on the occasion,