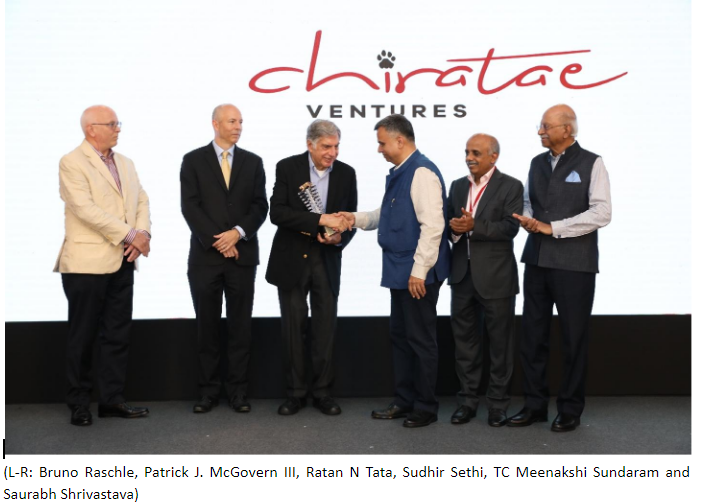 
Mumbai, 16th October 2019: Chiratae Ventures, one of the country’s leading venture capital firms felicitated Mr. Ratan N Tata with the Chiratae Ventures Patrick J. McGovern Lifetime Achievement Award during the company’s annual general meeting at Mumbai on Oct 15th 2019. Mr. Tata is a Senior Advisor for Chiratae Ventures and has been associated with the company for the last 4 years. The event was attended by founders of some of the portfolio companies like FirstCry, Lenskart, Cure.fit, PolicyBazaar, Bounce, and the whole start-up ecosystem.

Commenting on receiving the award, Mr. Ratan Tata said, \"It is a pleasure receiving this award from the Chiratae team. I have personally known Sudhir & the Chiratae Ventures team for a few years now. I have witnessed the company’s and team’s growth as IDG, now Chiratae. I’m proud of the impressive portfolio they have built over the years. I am happy to have been a part of their success story.”

\"We have been through a great journey together and we are honoured to have Mr. Ratan Tata accept the award from the Chiratae Team. He has been a great motivation and mentor to the team. The time invested by him in advising us is of immense value.” said Sudhir Sethi, Founder, Chairman and Managing Director of Chiratae Ventures

Patrick J. McGovern was the founder and chairman of International Data Group (IDG) and was the force behind the expansion of IDG into multiple countries and several businesses. He was the catalyst behind IDG ventures India, now Chiratae Ventures. To honour his legacy, in 2016, IDG instituted the Patrick J. McGovern Lifetime Achievement Award honouring global leaders who have left a lasting legacy to their businesses. Over the years, some of the names who received this award include Saurabh Srivastava, an entrepreneur and co-founder of IAN, Ashok Soota, Executive Chairman and co-founder of Happiest Minds Technologies, Bruno Raschle, Founder, Managing Director, and Non-Executive Vice Chairman of Schroder Adveq, Kris Gopalakrishna, co-founder of Infosys and John Thomas Chambers, the former executive chairman and CEO of Cisco Systems.

Patrick McGovern III, Chairman of Judge’s Committee said, “All the judges, which includes past recipients and Mr. Sudhir Sethi & Mr. TC Meenkashi Sundaram, unanimously selected Mr. Ratan N Tata as the awardee.” The selection criteria focused on Achiever of Eminence who has created a significant impact on India – Business ecosystem, entrepreneurial ecosystem, policy ecosystem over a good span of time.

Mr. Ratan Tata was the Chairman of Tata Sons, the holding company of the Tata group, from 1991 till his retirement on December 28, 2012. He was also chairman of the major Tata companies, including Tata Motors, Tata Steel, Tata Consultancy Services, Tata Power, Tata Global Beverages, Tata Chemicals, Indian Hotels and Tata Teleservices. During his tenure, the group’s revenues grew manifold, totalling over $100 billion in 2011-12. The Government of India honoured Mr Tata with its second-highest civilian award, the Padma Vibhushan, in 2008. He has also received honorary doctorates from several universities in India and overseas.

On-demand assignment help - find an assignment experts in 3 steps.
BuyEssaysCheap.com - affordable writing help
Go to Assignmentgeek.com and get your homework done.
There is no better press release writing company as 123 term papers.