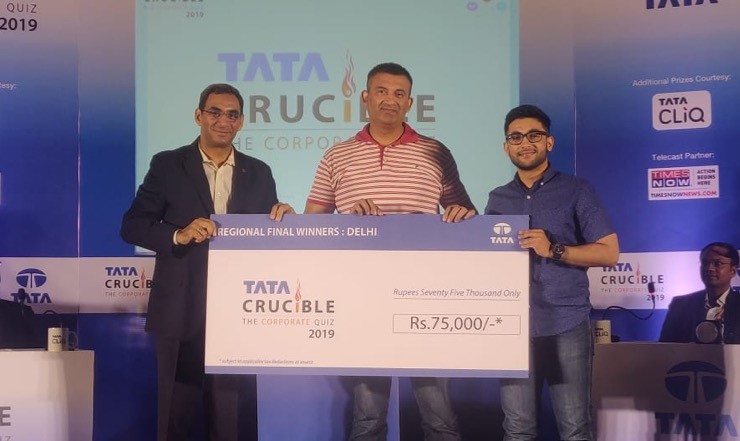 The Jamshedpur winners Srimant Kumar Mallick & Sampad Mishra from SAIL, Ranchi and Delhi winners Rohan Khanna & Yashwardhan Singh Chauhan from Barclays were the top two teams at the North Zone of Tata Crucible Corporate Quiz 2019, held in Delhi. They will now compete with the top two teams from the other three zones at the National finals to be held in Mumbai.

A total of 27 teams battled it out in the city level finale for the top honors, held at Vivanta by Taj Dwarka. Rohan Khanna & Yashwardhan Singh Chauhan took home a cash prize of Rs. 75,000* and will compete in the zonal round to qualify for the national finale. Kunal Malhotra & Bhaskar Jyoti Dey from Tree of Knowledge were declared runners-up, winning a cash prize of Rs. 35,000*. Mr. Nayan Seth, General Manager, Taj Palace, New Delhi was the chief guest at the finale.

The theme for this year quiz is built around ‘Industry 4.0 concept. Noted quizmaster ‘Pickbrain’ Giri Balasubramaniam hosted the quiz in his masterful, unique and witty style.

The sixteenth edition of India’s biggest corporate quiz will be held from September to October, traversing 25 cities, with four zonal rounds leading to the Grand National finale in Mumbai. The winners of the National Finals will receive a Grand Prize of Rs. 5, 00,000/-* along with the coveted Tata Crucible trophy.

The prizes for this edition of Tata Crucible Corporate Quiz are being supported by Tata Cliq.

Super Bowl 2020 Live Streaming
Go to Assignmentgeek.com and get your homework done.

There is no better press release writing company as 123 term papers.
BuyEssaysCheap.com - affordable writing help
On-demand assignment help - find an assignment experts in 3 steps.
Online assignment help by Copycrafter will free you from any academic issues