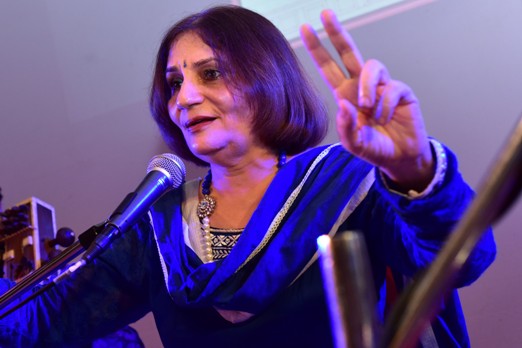 This musical festival will represent the melodious journey of Hindustani classical music with many eminent artists and their exponential disciples. Hon’ble Deputy CM Manish Sisodia, will be the chief guest for the inaugural function of the festival organized by Sahitya Kala Parishad, Department of Art, Culture, and Languages, Government of Delhi.

“Thumri Festival is being organized on a grand scale for the past few years. The enthusiasm of the audience to attend such musical event is a sign that our effort to promote the Hindustani classical music is being paid off. It gives me immense pleasure to be a part of the event. Culture is the best way to send the message of harmony and brotherhood to the people because Delhi has a reach classical music culture. I believe that this program will not only give a chance to people to explore the world of Thumri but also ensure us to reach out to people from across the spectrum,” said Hon’ble Deputy CM Manish Sisodia.

On the first day, the evening will witness some mesmerising performances by Devashish Dey, duo performance by Debapriya Adhikary and Samanwaya and Arati Ankalikar. Devashish Dey who was born in a music-loving family of Varanasi received his initial training under the tutelage of Pt. Pashupati Nath Mishra, a stalwart vocalist of Banaras Gharana. Devashish Dey has assimilated influences from these three leading gharanas to develop a harmonious style of his own.

As the evening proceeds, Debapriya Adhikary and Samanwaya will present their act. Debapriya and Samanwaya are A grade artist and Sitarist respectively of All India Radio and Doordarshan. Debapriyawas trained under Pt. Samaresh Chowdhury of Senia Gharana for long 13 years. On the other hand, Samanwaya is known for his mesmerizing approach and sparklingly perfect strokes on his expression of meends, gamaks, choot, fast and intricate taans from the lower octaves to soaring heights with ease. The evening will come to an end with an enthralling performance by Arati Ankalikar-Tikekar who is currently recognized as one of the top vocalists of the younger generation. Listening to her performances one sees a very pleasant blend of the various gharanas represented by her teachers.

On the second day of the festival, talented artists like Pandit Sarathi Chatterjee, Pandit Ganesh Prasad Mishra and Ashwini Bhide-Deshpande will be performing. Pandit Sarathi Chatterjee, born in a musical family, is one of the foremost Hindustani Classical vocalists in India. He received his initial training from his father, Prof.Arun Kumar Chatterjee, a highly respected and accomplished representative of the Kirana Gharana, and from his mother Smt Shefali Chatterjee. Thus, Sarathi’s music now blends the elements of Benares Gharana into the Kirana Gharana “gayaki” of his original training. The audience also gets to listen to Pandit Ganesh Prasad Mishra. This will be followed by Ashwini Bhide-Deshpande’s performance. Born into a family with strong musical traditions, Ashwini started her early classical training under the guidance of Narayan rao Datar. She then completed her SangeetVisharad from the Gandharva Mahavidyalaya. Since then, she has been learning music in the Jaipur-Atrauli style from her mother Manik Bhide. Ashwini also received guidance from Ratnakar Pai.

The last day of the festival will witness the performance of renowned artists like Pt Rajendra Sijuar, Dhanashree Pandit Rai and Pandit Channulal Mishra .Pt Rajendra Sijuaris one of the extremely talented and established vocalists of India. Representing the ‘Gaya Gharana’, which is generally known for its purabangthumri style Gayaki specialized in Bol Banao Thumri.. His performance will be followed by another mesmerising act by Dhanashree Pandit Rai. She is one of the leading Semi-Classical vocalists in India today, her speciality being the “Thumri”. Her repertoire spans Classical khayal, Thumri, Ghazal, bhajan and other semi-classical varieties.

She is trained in Khayal under the stalwart of the Kirana Gharana Pt. FirozDastur and further specialised in Thumri under the guidance of the thumri legend Shobha Gurtu.. The evening will be concluded with another melodious performance by Pandit Channulal Mishra. He is a Hindustani classical singer from Banaras, a noted exponent of the Kirana gharana of the Hindustani classical music and especially the Khayal and the 'PurabAng' – Thumri. Born in the home of Badri Prasad Mishra, he is the grandson of "Gudai Maharaj" Shamta Prasad, a noted tabla player.

Thumri festival is of the important events organized by Sahitya Kala Parishad to promote those genres of music, which are abruptly fading due to the advent of fusion/western/pop music. Being organized for the past many year son such a grand scale, Thumri Festival has become a signature mark in Delhi’s cultural calendar.The festival has been drawing overwhelming response from audiences all across and has become a huge success.