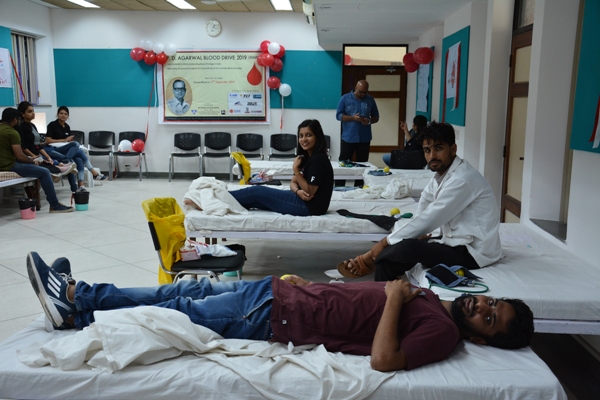 
Jaipur, September 2019: IIHMR Group of institutions organizes its 12th Blood Donation Drive, today across all its institutions viz. Delhi and Bangalore apart from Jaipur. This has been taking place since 2008 as a tribute to its founding inspiration, the late Shri P.D. Agarwal, founder of TCI, ABC India, Bhoruka and GATI to mark his 36th death anniversary. India faces a blood-less predicament of sorts as it falls short by 1.9 million units of blood, making it an immediate danger that the government is trying to combat.

The IIHMR Group has collected almost 175 Units of today. Students, faculty and staff enthusiastically participated in the blood donation drive which started at 10 in the morning and continued till 4 in the evening.

Inspired by Shri P.D. Agarwal’s vision, IIHMR wishes to expand the task of collecting blood to a grander scale. Since the launch of this exercise, the total units collected from all over India has shown an increasing trend. In fact, 2016-17 has seen the collection of 11.09 million units of blood across the country- with a 2% rise than in 2015-16. Yet the struggle is far from over as it is still short of the requirement, as per the WHO norm of 1% of the population, by 15%. Awareness is in the juncture of improvement and yet, it is the myths surrounds. The state-wise scenario is deplorable, as there are a total of only 2903 blood banks in the country or less than 3 blood banks for every 10 lakh population.

“One of the main objectives of the Shri P.D. Agarwal Blood Donation Drive is to eliminate blood shortage, specifically post the monsoons (September and October), which is, often, the time when seasonal diseases lead to a shortage of blood. To make this vision a reality, they have made the enhancement of blood donation a mission and therefore, chosen his death anniversary to conduct a Blood Drive all over India”, said Dr.Pankaj Gupta, President of IIHMR University.

As per WHO norms, it is estimated that donation by 1% of the population is the minimum requirement to facilitate a nation’s most necessities for blood. Blood donations prove crucial during emergencies or disasters as blood is essential in all major surgeries’ fractures, treatment of heart disease, etc. Cancer and sickle cell anemia, complications during childbirth or pregnancy and thalassemia are just some of the conditions during which borrowed blood becomes necessary to save and protect lives.

There is no better press release writing company as 123 term papers.
Go to Assignmentgeek.com and get your homework done.
BuyEssaysCheap.com - affordable writing help